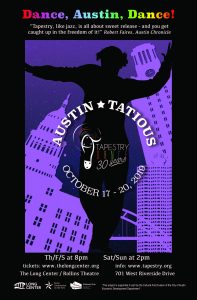 Tapestry Dance Company presents the encore performance of this rhythmic and movement celebration of Austin culture and music in celebration of the company’s 30th Anniversary!

(Austin, TX) – This season, Tapestry Dance Company will present encore an encore performance of the critically acclaimed Austintatious that opened at The Paramount Theatre in October of 2002. Not only does the company present its world-class rhythm tap foundation, but the company also returns to its multi-dance form roots and presents a tapestry of movement in and out of tap shoes! “Tapestry, like jazz, is all about the sweet release – and you get caught up in the freedom of it! – Robert Faires / The Austin Chronicle

Austintatious is a tribute to Austin music and culture with the show’s first half featuring a tour of some of Austin’s old carousing spots – starting early in the evening “On the Banks of Auditorium Shores” and winding up at “2:00 AM, Somewhere on Sixth Street.” These superbly performed and choreographed pieces succeed in capturing the spirit of some of Austin’s premier haunts. Take “One Too Many at the Broken Spoke,” a drunken riff of a Texas two-step set to the Derailers tune “Country-a-Go-Go.” It features casual, wobbly-legged, and, well, wasted-looking choreography that belies the control and technique required of the dancers. “Last Call,” with music by Guy Forsyth, is a full-company blowout of frenetic, synchronized tap rhythms encapsulating the blind flurry of those minutes before the bar closes.

“Perhaps the most soulful piece in this segment, though, was “Crashin’ the Party,” a soft-shoe tap anthem set to the Asylum Street Spankers’ jazzy, upbeat “Cakewalk.” It spotlighted the formidable Acia Gray, Tapestry’s co-founder and artistic director, whose presence stuns like a stiff right hook from the moment she strutted onstage.” We’re lucky this sterling organization calls Austin home.

Long Center Resident Company, Tapestry is a professional, non-profit dance organization founded in 1989 for the purpose of developing a foundation in multi-form dance performance and education and is home to the only full-time, repertory tap dance company in the world. TDC is home to six resident artists from around the globe, one of the oldest annual international tap dance festivals in the world, educational outreach programs as well as a pre-professional and adult training facility sharing the unique training syllabus of founders Acia Gray and Deirdre Strand.

The events and programs of Tapestry Dance Company include seasonal concerts at Austin’s Long Center, The Annual Soul to Sole Festival, community outreach programs such as Rhythm, Dance, Music & You!, numerous masterclasses and workshops as well as touring residencies throughout the world.

The company’s recent production of In Your Shoes won the best ensemble by The Austin Critic’s Table Awards, Passing It Forward – The American Dream? is now listed on the TCA Touring Roster and the company’s NEA Masterpiece production of The Souls of Our Feet -­ A Celebration of American Tap Dance toured The People’s Republic of China for 5 weeks and director Acia Gray has been asked to set a national syllabus for Chinese tap dance curriculum. Tapestry Dance Company is funded and supported in part by the City of Austin through the Cultural Arts Division and by a grant from the Texas Commission on the Arts and an award from the National Endowment for the Arts, which believes that a great nation deserves great art.

As a soloist, choreographer and master teacher, Ms. Gray has toured extensively across the U.S. and abroad and in 1989 co-founded Tapestry Dance Company in Austin, TX with Deirdre Strand and currently serves as Producing Artistic Director & Artistic Director of The Soul to Sole Tap Festival. A graduate of The American Academy of Dramatic Arts/NYC, Ms. Gray has shared the stage with Lon Chaney, Chuck Green, Steve Condos, Brenda Bufalino, Donald O’Connor, Fayard Nicholas, Buster Brown, Savion Glover, Gregory Hines, Jimmy Slyde, Sarah Petronio, Dianne Walker and many others in such productions as The Great Tap Reunion, Tap Do/Wop, Just Friends, Masters of Tap, Tap City, Chicago on Tap and Women in Tap. She was chosen to work with legend Charles ‘Honi’ Coles in America’s first creative residency for tap at The Colorado Dance Festival and again with Jimmy Slyde and was featured in the documentary A Class Act: The Magic of Honi Coles. She was a founding member and Managing Director of the touring company Austin on Tap, served on the Steering Committee of The International Tap Association and served as its director from 2008-2018 and was also a featured soloist in the Dance Magazine Calendar. She has also danced, choreographed and taught for Columbia College, The Univerisity of Texas, The Colorado Dance Festival, International Summer School/Cyprus, Dance Masters of America, TASIS/London, Tanzsommer/Austria, The St. Louis Tap Festival, The Chicago Human Rhythm Project, The NYC Tap Festival, Le Festival De Danse Encore and many others. Her book The Souls of Your Feet – A Tap Dance Guide for Rhythm Explorers has been translated in the Czech Republic and China and has been an Amazon.com Bestseller. Her numerous awards include the “Hoofer Award” by The New York City Tap Festival and a premiere member of the Austin Arts Hall of Fame.  She has received numerous “Best Of” awards by the Critics Table in Austin and her work The Souls of Our Feet – A Celebration of American Tap Dance was chosen as an NEA American Masterpiece production and toured throughout the US, Canada, and China. She can be seen in the documentaries Tap or Die, Thinking on Their Feet – Women of the Tap Renaissance and Passing it Forward produced by PBS. Ms. Gray is also the producer of The Soul to Sole Festival in Austin, TX.

www.thelongcenter.org for tickets – ON SALE NOW!

TICKETS AVAILABLE AT THE DOOR