Presented by Golden Hornet at The Highball, Austin TX 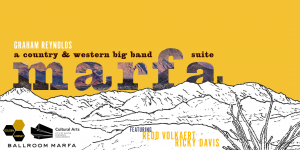 Celebrate the album release and experience this work – revamped and in its full fourteen piece form – for the first time since 2013 while enjoying drinks of your choice at The Highball on South Lamar!

Good times will follow the show, so stick around as more folks mingle in.

We are grateful to all the donors who made this work possible.

Golden Hornet and this event are supported in part by the Cultural Arts Division of the City of Austin’s Economic Development Department.

Tickets are general admission and begin at $15.
This event is primarily seated but some standing room may occur.
18+ before 10 pm, 21+ no exceptions after 10 pm.

Post-event programming will continue following the concert, open to the public.

There is surface parking for the highball at the shopping center. Please note, on Friday and Saturday nights, this parking is often full. We recommend parking across the street on Gibson and South 8th Street.

Austin Creative Alliance is funded in part by grants from Bloomberg Philanthropies, Texas Commission on the Arts and the National Endowment for the Arts which believes that a great nation deserves great art. We are also grateful for the ongoing support and participation of our members and patrons.