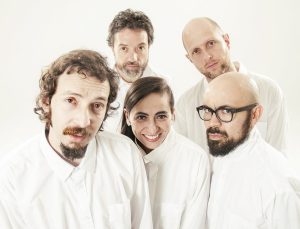 Courtesy of Bongo Joe via Bandcamp

Tropical Psychedelia from Colombia and Austin

“For those who haven’t heard previously heard them, Colombia’s Meridian Brothers are easily among the most interesting groups in South America” – AFROPOP

“The Meridian brothers push all boundaries of what you think

“For those who haven’t heard previously heard them, Colombia’s Meridian Brothers are easily among the most interesting groups in South America” – AFROPOP

“The Meridian brothers push all boundaries of what you think you know about music. Promise, you’ll love it” – NPR

“So why listen? Because it takes a strong will and clear musical vision for a band to cut through all the music for which Colombia is known” – NPR

“Tropical madness from the most consistent of all the “world for club culture” labels. Twisted cumbia at around 150BPM… terrorises the dancefloor!”- GILLES PETERSON

Colombian guitarist and composer Eblis Alvarez started Meridian Brothers back in 1998 as a vehicle for his own experimental music.  Over the years, the group has evolved into a five-piece band focused on re-interpreting all manners of Latin Tropical styles with a strong psychedelic and experimental sensibility. The Meridian Brothers’ music uses popular Latin American rhythms, augmented by sampling techniques, elaborate effect processing, and Eblis’ quirky and theatrical vocals, which channel imaginary characters with both pathos and humor.

The group has released records on Soundway records, Names You can Trust and Bongo Joe and have proved very popular in South America and Europe where the band has toured extensively and has started to reach out to an audience more familiar with indie rock and experimental than Latin music.

Meridian’s new album is a tribute to New York’s 70’s era Salsa Dura. For the project, they have created an avatar, a fictitious group named El Grupo Renacimiento, and written a new repertoire trying to emulate the writing style of those late 60’s and early 70’s groups while retaining the Meridian Brothers idiosyncratic style of arranging and recording. The sound of instruments has been modified to fit the Meridian electronic templates, and the result is a fantastic album true to the spirit of Salsa Dura and in line with Eblis Alvarez two decade-long experiment with Latin tropical sounds.

The album will be released on the Ansonia label – a historical Latin label that was specialized in Puerto Rican, Dominican and Cuban music from the 1960’s and has only recently been revived and has made its catalog finally available on digital platforms.

Meridian Brothers new album will be their first release in over 30 years – a nod from Ansonia Records to the legacy of Latin music history as it steps into the modern era.

Eblis Alvarez has been an intricate part of the new generation of Colombian musicians for the past ten years. He is also a former member of Frente Cumbiero and a current member of trio Los Pirañas.

Superfónicos is Colombian Funk. Better yet, it is Caríbe Soul…fed by the Indigenous and African roots of the band’s Colombian heritage, telegraphing a politics of peace and unity from the stage to your ears. They only ask that you dance toward a place in your mind beyond struggle and strife.

Superfónicos was formed when bassist Nico Sanchez and guitarist Erick Bohorquez began discussions about creating a group with a foundation in Afro-Colombian rhythms. They soon teamed up with guitarist Andres Villegas and percussionist Daniel Sanchez, and started rehearsing together during time away from their other bands. That core group developed the band’s unique sound, laying the foundation of what was to come. In 2016, gaitero and vocalist Jaime Ospina—who has recorded with the likes of Pacha Massive—relocated from Colombia to Austin, where he met and instantly connected with the group. It was also during this time that the band met with famed local producer and Grammy winner Adrian Quesada at Level One Sound. Their recording session resulted in a sound that not only encapsulates a moment in time but helped to define Superfónicos as a collective. It is a musical mestizo that is ever-changing but deeply rooted in Caribbean flavors.

Epistrophy Arts is a grass-roots cultural organization dedicated to presenting the finest adventurous and improvised music in Austin Texas. Since January of 1998 we have presented over 50 concerts with some of the major figures in international contemporary adventurous music