Presented by Epistrophy Arts at The North Door, Austin TX 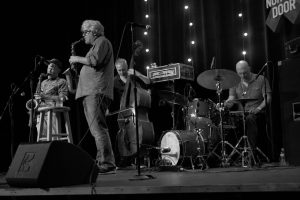 Broken Shadows is a quartet of kindred spirits communing over shared loves and common inspirations, radiating not only homage but aspiration – to make music with deep roots reach out into the present moment, alive and attuned and moving through our air now. These four musicians hailing from the urban northern half of America – Tim Berne, Chris Speed, Reid Anderson and Dave King – have banded together to reinterpret the timeless sounds conjured by great men from the rural South and

Broken Shadows is a quartet of kindred spirits communing over shared loves and common inspirations, radiating not only homage but aspiration – to make music with deep roots reach out into the present moment, alive and attuned and moving through our air now. These four musicians hailing from the urban northern half of America – Tim Berne, Chris Speed, Reid Anderson and Dave King – have banded together to reinterpret the timeless sounds conjured by great men from the rural South and heartland of the country: Ornette Coleman, Julius Hemphill, Dewey Redman, Charlie Haden. These iconic figures created an ever-resonant avant-garde out of the folk-art influences of their early surroundings, a canon that comprises the hard blues and deep lament, keening celebration and hollering protest. Wound through the DNA of such avant-jazz classics as “Dogon A.D.,” “Lonely Woman,” “Civilization Day,” “Walls- Bridges” and “Song for Ché” are the age-old sounds of back-alley bars and carnival midways, funeral processions and holiday parades, the rave-ups of Saturday night shading into the hymns of Sunday morning. The way saxophonists Berne and Speed perform this music with the bass-and-drum team of Anderson and King has a rocking, roughhewn harmonic convergence wholly in keeping with the source materials, even as their improvisations have a searching, burning modernism of their own. To channel the cultural history of this music, the players of Broken Shadows can rely on their personal history as friends and collaborators; among various associations, Speed played in Berne’s Bloodcount band in the 1990s, while Anderson and King are two-thirds of the genre defying band The Bad Plus. This foursome is onto something special here – the emotive breath and beat of this music being undeniable, infectious; these are players known for their ability to take it out, but Broken Shadows gives them a vehicle to get down. — Bradley Bambarger

Dave King is one of the most celebrated drummers in modern jazz. His contributions to the Minneapolis and New York jazz scenes are incalculable, and his imagination and boundless enthusiasm behind (and around) the drum set are singular and stunning. He has performed in 75 countries on six continents, and has been a member of bands like The Bad Plus, Happy Apple, Halloween Alaska, 12 Rods, Love Cars, The Gang Font, and others. He has also recorded or performed with Bill Frisell, Joshua Redman, Jeff Beck, Tim Berne, Mason Jennings, Mark Morris Dance Company, Haley Bonar, Meat Beat Manifesto, Craig Taborn, Jason Moran, David Torn, Atmosphere, and many others.

Originally from Minneapolis, Reid Anderson emerged as one of the most promising bassists and composers on the New York jazz scene. He studied classical music at Philadelphia’s Curtis Institute of Music, graduating in 1993. Upon arriving in New York in 1994, he began working with like-minded young players such as Mark Turner, Jorge Rossy, Ethan Iverson, Kurt Rosenwinkel, and Bill McHenry. Andersonhas released a number of albums on the Fresh Sound/New Talent label, and he co-leads the acclaimed trio The Bad Plus with drummer David King and new member Orrin Evans. In addition, Anderson also fronts his own rock band, the Sun, for which he sings and plays guitar.

Tim Berne has been declared “a saxophonist and composer of granite conviction” by The New York Times. Acclaim for the first, eponymous ECM album from Berne’s quartet Snakeoil came from far and wide, with The Guardian calling it “an object lesson in balancing composition, improvisation and the tonal resources of an acoustic band.” With the release of his second ECM album, Shadow Man, All About Jazz affirmed Snakeoil as “Berne’s most impressively cohesive group yet.”). You’ve Been Watching Me, saw Berne leading a quintet version of Snakeoil, adding guitarist Ryan Ferreira to the core group with Matt Mitchell, Oscar Noriega and Ches Smith.

Since learning at the elbow of St. Louis master Julius Hemphill in the ’70s, the Syracuse, New York-born Berne has built an expansive discography as a leader. In his pace-setting ensembles over the past few decades, he has worked with a who’s who of improvisers, including Joey Baron, Django Bates, Jim Black, Nels Cline. Mark Dresser, Marc Ducret, Michael Formanek, Drew Gress, Ethan Iverson, Dave King, Herb Robertson, Chris Speed, Steve Swell, Bobby Previte, Hank Roberts, Tom Rainey and Craig Taborn. As a sideman, Berne has made ECM appearances on recent albums by Formanek (The Rub and Spare Change; Small Places) and David Torn (prezens). The New York Times summed him up by saying: “Few musicians working in or around jazz over the last 30 years have developed an idiomatic signature more distinctive than Tim Berne.”