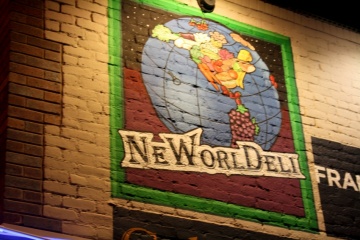 New World Deli came into existence because owners Greg and Sarah Bontempo wanted to create a restaurant where their young children could come to work with them and they would not have to rely on day care.

When you enter NeWorlDeli you are greeted by the aromas of simmering sauces, homemade soups, and roasting meats wafting from the kitchen. This casual Hyde Park cafe caters to those who crave an old-fashioned sandwich piled high with fresh deli meat, cheese and all the trimmings.

In the early days you would often see little Abigail taking a nap on the bread shelf while Claire glided around visiting customers on her red scooter! Now a days Claire is attending the University of Texas and enjoys working at the counter during the summer months, Abby loves to help on the counter and little Emma can be seen bussing tables and running food. The little red scooter has been replaced by a little red "Rip Stick".

Greg has had a life long affair with the restaurant industry. He grew up working with his father, who was the quintessential "Deli Man", in their butcher shop which was the heart and soul of a small town community in New Jersey. He wanted to continue the tradition by creating a restaurant where people in the area could come together and enjoy freshly prepared food and great conversation.

Both Greg and Sarah earned their degrees at UT while working in all facets of the business. They met after college when Sarah applied for a job at a restaurant that Greg was running. It goes without saying that he hired Sarah and the rest as they say is history.

Finding it mutually rewarding and a personally satisfying way to make a living while raising a family they decided to create the New World Deli. So come on in to see us to enjoy a delicious meal in downtown Hyde Park.