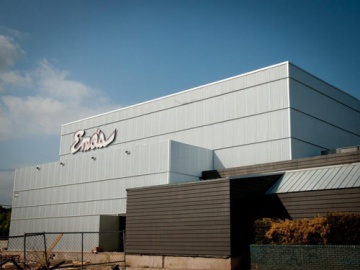 It’s been almost twenty years since Emo’s first opened its doors, and in that span of time countless bands have not only graced the stage (including the legendary Johnny Cash, just look for his barstool hanging from the ceiling) but all helped cement Emo’s as the live venue of Austin. Marked by its grittiness, Emo’s has long represented the unfettered (and sometimes crass) spirit of the live music capital of the world. Unfortunately, times change, and Austin is not the same city it was in the early 90’s by any means. It was time for Emo’s to meet the growing demand for bigger, better, and flashier venues. With a top-of-the line sound system, three full bars, showers and laundry machines in the green room, as well as iconic live photos from shows past lining the walls, Emo’s East is sure to take back the crown as the biggest and best venue in the city.