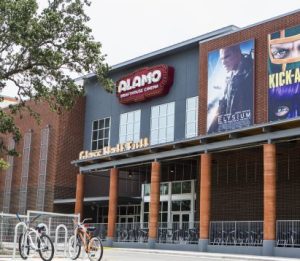 Alamo Drafthouse was founded in Austin, TX by Tim and Karrie League, who were driven by a simple passion for watching movies and enjoying food and beer. Their first theater at 409 Colorado Street was a handbuilt one screen operation that initially featured second run titles at discount rates. The Leagues’ passion for programming quickly soared past the standard repertory theater midnight fare.

Soon, what was once a non-descript parking garage became a hub for cinephiles far beyond central Texas. Within its first year the venue was playing host to film premieres and visiting filmmakers. Over the years, the original Colorado Street location became a laboratory for more innovative programming and events, and the Leagues began opening more and larger theaters that offered a fresh mix of Hollywood product and indie fare.

Today, Alamo Drafthouse has dozens of locations across the United States, with many more to come. Each location is managed with the same dedication and careful regard to film-inspired food and drink, crystal-clear visual and audio presentation, and deliriously fun special events, all inspired by those first years at Colorado Street.