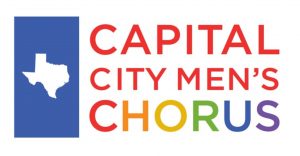 The Capital City Men’s Chorus is gay men and their allies raising voices in song to change minds, transform lives, and build community.

The award-winning Capital City Men’s Chorus, under the direction of Dr. Jeffrey Jones-Ragona,is an all-male chorus, based in Austin, TX and is the longest, continually running men’s chorus in Austin. From local churches and theaters in the Austin area, to Carnegie Hall in New York City, to the concert halls of international locales, the Capital City Men’s Chorus has a rich performance history that spans 25 years!

The CCMC also believes in giving back to the community in which they live, through partnership with local charitable and humanitarian organizations, by performing for local fundraisers, organizing toy drives, and partnering with organizations that serve those in need in the greater Austin area.

They currently have three CD’s:Silent Noon, Northern Lights, and Return to Standard Time.

Membership in the CCMC is open to all persons who support CCMC’s Mission and Vision Statement. Participation by singing as well as non-singing membership is encouraged!

The Capital City Men’s Chorus (CCMC) was founded in 1989 by sixteen volunteer members. The CCMC has operated as a non-profit 501(c) (3) arts organization since 1990 and is the recipient of funding through a Cultural Contract from the City of Austin Cultural Arts Division. However, the majority of financial support for the group comes from the continuing generosity of individuals and businesses in the Austin area community.

The CCMC is an active member of the Gay and Lesbian Association of Choruses (GALA). GALA, the association of the international gay and lesbian choral movement, represents over 180 men’s, women’s, and mixed choruses and thousands of audience members in North America, Europe, South America, and Australia. GALA is dedicated to providing leadership and inspiration through excellence in the choral arts. Our Voices Win Freedom.