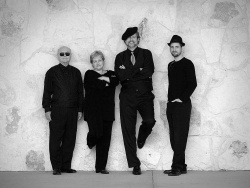 Four world class professionals make up the Artisan Quartet: Richard Kilmer and Paula E. Bird (violins), Bruce Williams (viola), and Douglas Harvey (cello). Between these four musicians, they have performed on six continents and half the United States. Members of the Austin Symphony and other various organizations in Central Texas, the Artisan members bring a wealth of experience and variety to their music making.

QUARTET BIOGRAPHY
In it’s brief history, The Artisan Quartet has already performed many concerts around central Texas including at the Victoria Bach Festival, the Incarnate Word University in San Antonio, the Blanco Performing Arts Association Series, the Twilight Series (Jonestown/Lago Vista), the Santa Cecilia Series (Austin), Texas State University (San Marcos), and the Salon Concert Series (San Antonio). The Artisan’s also offer future performances in Austin through the Fall of 2012 with their own "Genius at Play" Series, featuring the complete string quartets of Beethoven. The Quartet is presently in talks with the Austin Symphony to host a chamber music series through the ASO starting in the 2012-2013 season.

The group also recently recorded part of the film score soundtrack for the documentary about Barbara Conrad Smith, the legendary Metropolitan Opera singer. The film, entitled "When I Rise" premiered to a standing ovation at its premiere during the SxSW film festival in Austin in March 2010 and aired February 2011 on PBS’s "Independent Lens" series. The Artisan is very proud of its participation in this event. The film was excellent, and it was a pleasure to put the film score together with the director Mat Hames and the composer David Hamburger. The film DVD is available for purchase from www.shoppbs.org.