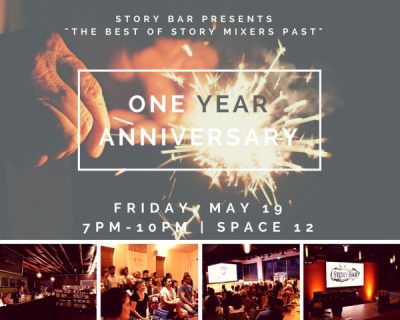 Presented by Story Bar at Space12

Story Bar is an event series featuring storytelling through all art disciplines, with plans to open a physical multi-disciplinary arts venue in the future. Join us as we celebrate our one-year anniversary and present a “Best Of” show, featuring some of our favorite acts from the past 12 months, plus a few other surprises. The evening promises a wide variety of mediums, including storytelling, poetry, music, film, theatre, comedy, and dance!

Visit http://www.storybaratx.com/event/story-mixer-best-of-anniversary/ to RSVP and view the event line-up.

ARTISTS
THE BACK PACK
The Back Pack has been together performing silly non-spoken sketch comedy shows on stage since their days at The University of Montana, starting in  2008. The  B. Iden Payne and Frontera Fest Best of Fest Winners offer quarterly shows of old, new, and workshopping pieces. They currently work and perform in The Back Pack Co-Lab in East Austin.  The Back Pack is comprised of Pete Betcher, Katie Kohler, Justin Morley, and Jeremiah Rosenberger.

HOLLY LORKA
Holly Lorka is a writer, storyteller and retired comedian who lives in Austin. Her work has been featured on Dan Savage’s Hot Mic, Soundtrack Series, and she’s a regular performer at BedPost Confessions and other shows in Austin. She’s known for her honesty and her hair, both of which regularly get her out of speeding tickets.

ROSALYN NASKY
Rosalyn Nasky is an Austin-based performer and choreographer who enjoys expanding her craft through a variety of performance opportunities. She has presented her work at Fusebox Festival, Monkey Town, Omaha Under the Radar, FronteraFest, INdustry Night, Soundspace, Big Range Dance Festival, and Fall for Dance Festival.