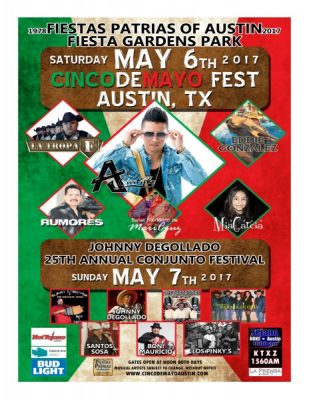 Presented by Fiestas Patrias of Austin at Fiesta Gardens

Fiestas Patrias of Austin presents the 12th annual Cinco de Mayo fiesta on May 6-7, 2017 at Fiesta Gardens Park. This City of Austin Park is located on the North shores of Lady Bird Lake east of IH 35. Commemorating Mexico’s victory from France in 1862, Fiestas Patrias of Austin invites the Austin community to the Cinco de Mayo fiesta to celebrate and recognize one of Mexico’s historical victories.

The tradition of Cinco de Mayo dates back to May 5, 1862 when the Mexican army led by General Ignacio Zaragosa led his smaller troop of soldiers in Puebla against the invading forces from France. This battle was part of a campaign by the French to install a European monarch led by Maximilian the archduke of Austria as emperor of Mexico. On May 5th, after an intense two hour battle the Mexican forces held their ground and the French army retreated.

However, the victory by Mexican army in this international conflict was just a minor set-back for the French who returned back in 1862 with a larger army and defeated the Mexican army.

The festival will bring the extraordinary sound of the accordion and bajo sexto guitar to life through various rhythms and beats. The unique sound of these Tejano/Tejano Conjunto groups using a variety of musical instruments along with the vocal harmony from lead and backup singers brings the heart and soul of Tejanos to life on the stage at Fiesta Gardens.

Highlighting the two-day event on May 6 is Tejano sensation A.J. Castillo, La Tropa F, Yayo Castillo, Eddie Gonzalez, Mia Garcia and Ballet Folklorico de Mari Cruz. Sunday May 7 we feature the 27th annual Johnny Degollado Conjunto Festival with many of the best accordionist in the state of Texas.

For scheduling information visit our web-site at www.cincodemayoaustin.com