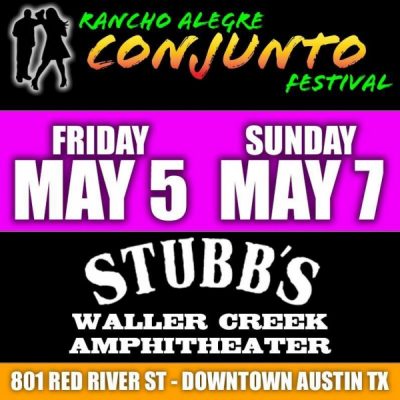 The Rancho Alegre Conjunto Festival burst onto the Austin music scene in 2012 with a fresh take on conjunto, a traditional, accordion-driven Texas music form.

Presented by Austin non-profit organization Rancho Alegre Radio, the festival hit the ground running with a lineup full of legendary, veteran, and up-and-coming groups from all over Texas, much to the delight of music-loving fans who couldn’t get enough of the bright accordion melodies and irresistible beats. In just three short years, the festival brought over 40 different groups, many of whom had never played in Austin, to the “Live Music Capital of the World.”

In 2017, the Rancho Alegre Conjunto Festival has returned, and has found a new home at the world-famous, iconic music venue Stubb’s Waller Creek Amphitheater!