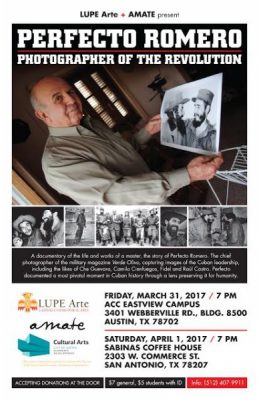 THE STORY OF PERFECTO ROMERO

Perfecto Romero: Photographer of the Cuban Revolution is a documentary produced by AMATE (Agencia de Medios Alternativos y Taller Editorial / Alternative Media Agency and Trade Editions), a news agency founded in March 1995. Perfecto Romero: Photographer of the Revolution chronicles the life and works of Perfecto Romero (b.Cuba, 1936). As a young peasant, Romero wanted to join the guerilla forces fighting against Fulgencio Batista and with that idea he journeyed to the Escambray Mountains.  It was there that he met Ernesto Che Guevara, who, upon realizing that Perfecto made his living as a street photographer, encouraged him to document the war effort and offered him the post of war correspondent of his guerrilla column.

Perfecto Romero: Photographer of the Revolution, originated when Raymundo Reynoso, director of AMATE and Paula Ramirez, executive director of the cultural institution MACONDO met Romero at the International Institute of Journalism José Martí, during a conference in which the role of photojournalists who have been war correspondents, and the photographic work of Ernesto Che Guevara among others, was analyzed.

Raymundo Reynoso and Paula Ramirez of Los Angeles, California will attend the viewing for a post Q & A session.

The event is sponsored by the City of Austin Economic Development Cultural Arts Division.

Accepting Donation at the door
$7 general, $5 student with ID

Doors open at 6:30 PM for the viewing at the Multipurpose Room in Building 8500; a post Q&A session thereafter.