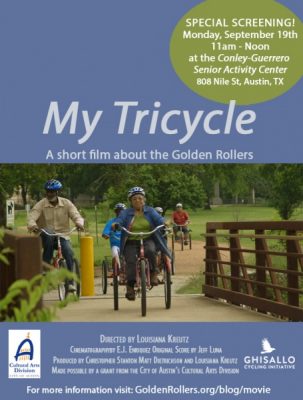 MY TRICYCLE: A FILM ABOUT THE GOLDEN ROLLERS (SPEC...

You are invited to a Special Screening of the new short film about the Golden Rollers (seniors on adult tricycles)!

This film follow members of the Golden Rollers, Austin’s senior tricycle program which is a collaboration between the Ghisallo Cycling Initiative and the Conley-Guerrero Senior Activity Center in East Austin. It provides an opportunity for adults aged 50 and older to engage in low-impact, bicycle-based recreation, exploration, and transportation. These are their stories as they explore the world on three wheels, proving you are never too old to roll.

What:
My Tricycle: A film about the Golden Rollers
Directed by Louisiana Kreutz

Starring participants of the Golden Rollers and members of Ghisallo Cycling Initiative.

The film is 8 minutes long, with questions and answers with the cast and crew afterwards.

Made possible with a grant from the City of Austin’s Cultural Arts Division!