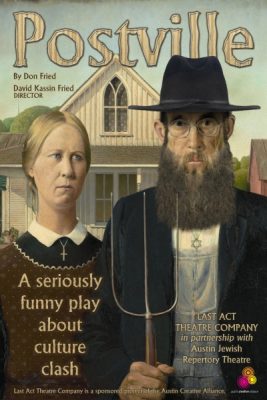 Postville is a funny, moving play about what happens when a group of Hasidic Jews from Brooklyn open a kosher meat-packing plant in a struggling Iowa town. The locals think their problems are over, but immigrants pour in, and a culture clash ensues that turns the American melting pot into a pressure cooker set to explode.

Postville is inspired by true events, which were widely covered in the media in 2008, when the Postville Agriprocessors plant was raided by U.S. Immigration and Customs Enforcement personnel.

“The play is about change,” says playwright Don Fried. “Change is inevitable and it hurts. When people are in pain, they do things they later regret. But if they persevere in working together, they can succeed.”

“Immigration, culture clash and racism are timeless themes,” says director David Kassin Fried, who is also the playwright’s son. “But they’ve become even more topical with Brexit and the current U.S. election cycle.”

Postville was selected out of thousands of submissions for a staged reading at the 2009 Playwright’s Showcase of the Western Region in Denver. Last Act Theatre Company chose it for production from 40 responses to its 2014 call for scripts.