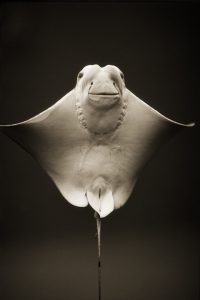 I choose to look closely and abstractly – to see my subjects for their inherent beauty, oddness, mystery.

As subjects, animals are close to perfect for a photographer, especially if they live in zoos and aquariums. If it rains, or if the light is against you, you can come back the next day. Your subjects can’t go far. Not close enough? Wait until they ran out of grass in the far pasture and come to you. Miss the shot? They will swim back your way if you’re just patient. Animals give no attitude, and they also require no model releases. Actually, strictly speaking, animals (even domestic pets) do need to be model released if you’re using their image commercially, because the law considers them property.

So, I took the path of least resistance and shot only in zoos and aquariums. For a while, I billed myself as The Jewish Wildlife Photographer. I never shot in a jungle or underwater. Only where there was a food court, bathrooms, and WiFi.

When I started this series, I was more than a bit insecure about it. So many great (and not so great) artists had tackled similar subjects since the beginning of time. How could I presume to add to this daunting history? One thing I did not want to do was simply document my animals, so I chose not to shoot in color and not to show their environment. Rather, I choose to look closely and abstractly – to see my subjects for their inherent beauty, oddness, mystery. For this, I shot often with macro lenses and close-up filters, so I could get close, and worked with grainy, over-processed film and printed in sepia to give them an old-school, timeless feel.

Actually, I tried to shoot as though I was in a studio. Like an Irving Penn or Richard Avedon – simple backgrounds that make you really look at the subject, not its surroundings. Get close and you see the hair on an elephant’s legs, an octopus’s single eye, a cow nose ray’s gull necklace. I admire photographers who can style or stage a subject to make their picture. But for me, what exists in nature trumps anything I can image. You can’t make this shit up.

Street parking and 2 parking spots behind the building are available.