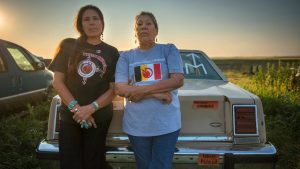 Warrior Women is the story of Madonna Thunder Hawk

In the 1970s, with the swagger of unapologetic Indianness, organizers of the American Indian Movement (AIM) fought for Native liberation and survival as a community of extended families.

Warrior Women is the story of Madonna Thunder Hawk, one such AIM leader who shaped a kindred group of activists’ children – including her daughter Marcy – into the “We Will Remember” Survival School as a Native alternative to government-run education. Together, Madonna and Marcy fought for Native rights in an environment that made them more comrades than mother-daughter. Today, with Marcy now a mother herself, both are still at the forefront of Native issues, fighting against the environmental devastation of the Dakota Access Pipeline and for Indigenous cultural values.

Upon registration, you will receive a token to view the film on your own within a week. Cine Resistencia event will be a gathering to discuss this groundbreaking and truly necessary film with special guests to be announced.

Red Salmon Arts is a 501(c)3 grassroots cultural arts organization, with a thirty-year history of working with the indigenous neighborhoods of Austin. RSA is dedicated to the development of emerging writers and the promotion of Chicanx/@/Latinx/@/Native American literature, providing outlets and mechanisms for cultural exchange, and sharing in the retrieval of a people’s cultural heritage with a commitment to social justice.

VoxFem Xicanindia is a project of VoxFem, which is a small team of women who have made it our mission to contact and feature at least one woman singer-songwriter/composer and visual artists, filmmakers and changemakers from every nation and occupied territory in the world.