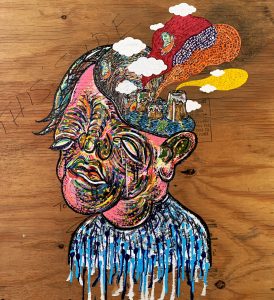 Thank you, Pandemic: A Consolation

Link & Pin Gallery is delighted to welcome Thank you, Pandemic, featuring visual and musical artist, Rohitash Rao in a mash up of video, 2d and 3d works.

Rao is grateful for the opportunity to create that being in isolation for eighteen months provided.  Rao says:  the pandemic is horrible. It is an utterly terrible period in human evolution in every possible way. BUT…the one positive thing that it did for people like me is that it allowed me to be locked away in my studio for a year-and-a-half and just create.

In addition to paintings, the show will include showings of two music videos. The Fearless video is a Pink Floyd cover by BLUEOX.  All 3,771 frames of the video were created on a single piece of wood layered on top of each other. The final picture will be available.

Side Effects is a stop motion music video that highlights the effects of pharmaceutical drugs. Music:  Side Effects by Bar-Ing All. The individual dioramas will be available.

Rao has more than 20 years of multimedia experience as a creative director, animator, director, and children’s book author.

In the 1990s, Rao served as an art director, creating award-winning advertising campaigns. He moved to the SciFi Channel in 2002 as creative director. Rao was part of the channel’s brand re-launch and created and directed many brand spots and network IDs, which led to his career transition to animation and directing.

In 2007 his animated short film “Battle of the Album Covers” was a viral hit. His films have played in more than 25 film festivals worldwide, and he has also directed multiple music videos that blend live action and animation.

Rohitash Rao currently is an assistant professor of practice at the Stan Richards School of Advertising & Public Relations at the University of Texas at Austin.