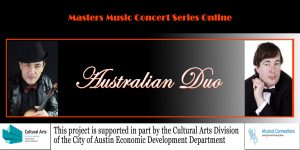 To keep you safe and entertained during the pandemic, Musical Connections is proud to present a virtual re-creation of postponed shows of Masters Music Concert Series Online!
This is a free event and donations are welcome. All of donations go to support the Austin local musicians. You can register for your free ticket and make a donation of any amount at the ticket link listed.
https://www.eventbrite.com/e/masters-music-concert-series-online-australian-duo-tickets-120460940917
This concert presents classical pieces as well as multicultural musical projects. In the concert, Tchaikovsky Competition Laureate Oleg Polansky will perform works from the classical piano repertoire. Violinist Johathan Leviim will join duo with music of Paganini, Massenet, Gluck, Rachmaninoff, Rubinstein and Schubert.
Concert will be available for you to view any time from September 15 to September 25, 2020 at Musical Connection website.

Link for download available by request for the donors.
Violinist Jonathan Leviim has performed on every continent and in over 70 countries, with all the major orchestras, and with many leading chamber musicians. He has played in some of the world’s most prestigious venues, including: Cologne Philharmonic Hall, Munich Philharmonic, Dusseldorf Philharmonic Tonhalle, Philharmonic Hamburg, The Schauspielhaus- Berlin Concert Hall, National Arts Center in Ottawa, Hong Kong Arts Centre, Centre Colon in Madrid, Spain and Sydney Opera House, Australia.
He performs with great passion and warmth, and with breathtaking technique. “Jonathan is a genius – his passion for the violin is amazing,” said one concertgoer recently. He has a trademark rapport with his audience (who are often left speechless by his talents), and also loves bringing his musical gifts to regional communities, despite having vast experience in some of the world’s most prestigious venues. This concert is a unique opportunity to experience the brilliant sound of the violin at the hands of a maestro, in an informal, friendly and spontaneous atmosphere.
Pianist Oleg Poliansky was born in Kiev, Ukraine, in 1968. He was the winner of many international competitions, firstly, the International Tchaikovsky Competition in Moscow (Russia) in 1998. In addition to that, he won prizes in Tokyo (Japan) in 1986, in Montreal (Canada) in 1988, the The international Duo Competition in Memoriam of Christian Ferras and Pierre Barbìzet in Marseille (France) in 1997, the World Piano Competition in Cincinnati (USA) in 1999 as well as the Citta di Cantu (Italy) in 1998 and 2003. In the course of his career, Mr. Poliansky has made appearances at the largest international concert arenas and has given concerts as a soloist with renowned orchestras such as The Moscow Soloists, The Moscow Symphony Orchestra, The National Symphony of Ukraine, The Novosibirsk Symphony Orchestra, the Urals Symphony Orchestra in Yekaterinburg, Budapest Strings, Neue Philharmonie Westfallen, Sinfonietta Hungarica, Junge Philarmonie Köln, The National Orchestra of Malta, The KBS National Radio Orchestra of Korea, Pusan Philharmonic Orchestr and Seoul Philharmonic Orchestra with Myung-Whun Chung.
He has been a regular guest at international festivals, such as the Klavierfestival Ruhr, Rheingau Music Festival, Schleswig-Holstein Musik Festival, The New Generation (Dortmund), Europaisches Klassikfestival Ruhr, Festival du Vigan, la Grange de Meslay, La Folle Journee (Nantes), Great Waterbury Summer Music Festival (Connecticut) and many others.
He is also a prolific chamber musician and has collaborated with many well-known artists within the music world, including Pavel Gililov, Henry Sigfridsson, Pierre Amoyal, Mayuko Kamio, Mayu Kishima, Sayaka Shoji, Michail Ovrutsky, Natasha Korsakova, Erik Schumann, Leticia Munoz-Moreno, Boris Pergamenschikov (deceased), Kirill Rodin, Lazslo Fenyo, Tatyana Vassilieva and Dmitri Sitkovetski.
He has produced quality recordings for various Russian and German broadcasting companies. Sample recordings include the Grande Sonate of Tchaikovsky with Michail Ovrutsky , the First Violin Sonate of Mieczyslav Weinberg for the German broadcasting company, WDR, and a Duo CD with cellist Lazslo Fenyo for Aulos Records.
Poliansky started piano studies at the Lysenko Music School in Kiev, where his teachers were Natalia Gridneva and Natalia Tolpygo. Other major teachers include Alexandr Alexandrov at the Gnessin Institute in Moscow, Sergei Dorensky at the Moscow Conservatory, and Pavel Gililov at the Musikhochschule Köln. He currently resides in Köln and holds the academic position of Associate Professor of Piano at Hochshule für Musik Köln, a position he has held since 2007.
This project is supported in part by the Cultural Arts Division of the City of Austin Economic Development Department.