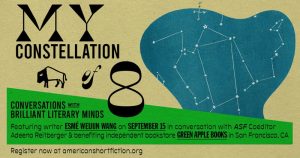 My Constellation of 8: Conversations with Brillian...

This fall, American Short Fiction will host three virtual events featuring some of today’s most exciting writers to share eight books that shaped their thinking, changed them, and helped them grow as writers, as thinkers, and as people.

Our second installment will feature award-winning writer Esmé Weijun Wang in conversation about eight of her literary influences with ASF‘s Coeditor Adeena Reitberger and will benefit Green Apple Books, a trio of fiercely independent bookstores in San Francisco matching good books to curious readers since 1967.

Esmé Weijun Wang is the author of the New York Times-bestselling essay collection The Collected Schizophrenias and the novel The Border of Paradise, which was one of NPR’s Best Books of 2016. She received a 2018 Whiting Award, was named by Granta as one of the “Best of Young American Novelists” in 2017, and was the recipient of fellowships to Yaddo and MacDowell. Born in the Midwest to Taiwanese parents, Esmé can be found at esmewang.com, on Twitter @esmewang and on Instagram @esmewwang.

Green Apple Books is a trio of fiercely independent bookstores in San Francisco matching good books to curious readers since 1967. The stores welcome all, offer a well-curated selection of books in all subject areas, and engage broadly in the literary community within our walls and beyond.