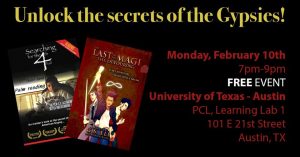 Free Screening of G.S. Eli's "Searching for the 4th Nail"

Presented by Perry Castaneda Library at University of Texas at Austin

JOIN G.S. Eli for a viewing of “Searching For the 4th Nail” and a discussion “What If Harry Potter Were a Gypsy?” at the University of Texas at Austin from 7-9pm on February 10th!

“Searching For the 4th Nail” follows Eli, an American Rom, as he turns his camera onto the secret life of his Romani culture. As we see through his 8mm family footage, growing up “Gypsy” was a pretty good life – carefree. Eli’s journey begins when his two sons ask: “What does it mean to be a Gypsy?” He has no clear answer beyond what he’s learned from movies and TV. The filmmaker and his sons begin a quest for the truth. City after city, the roots of old ways begin to reveal themselves in an intricate tapestry of tradition – and oppression. Eli’s sons light up the screen with their youthful perspectives on very heavy subjects ranging from the Holocaust Museum to Hollywood, and from ancient India to Ellis Island. Eli and his sons are always fun on-screen, although they confront negative stereotypes and uncover a terrible history of persecution; finally realizing that the only way out is the main thing that their Romani community avoids: conventional education.

Audience members at the Austin event will also be given a free gift – access to a digital copy of The Last of the Magi. Austin-based musical virtuoso Oliver Rajamani will be a special guest and perform traditional Romani songs in the PCL plaza beginning at 6:30 p.m. For more information about G.S. Eli, please visit www.ClairvoyantConsultant.com.

University of Texas at Austin