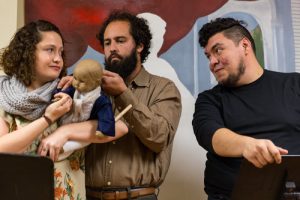 Casta is inspired by a series of casta paintings by Miguel Cabrera. Casta paintings were a unique form of portraiture that grew in popularity over the 18th century in Nueva España/colonial Mexico. The paintings depicted different racial mixtures arranged according to a hierarchy defined by Spanish elites. When a lowly apprentice is commissioned to paint a casta series for a wealthy patron, he tries to conform his work to a set hierarchy. The images revolt, illuminating a complex portrait of fluid Latinx identities.

In anticipation of the Fall 2021 premiere at the Blanton Museum of Art as part of their Painted Cloth: Fashion and Ritual in Colonial Latin America exhibit, this Works Progress Austin workshop will support experimentation with song, dance, textile arts, and development of the second half of the script.

Dramaturgy and Translation by Jesús I. Valles

TICKETS: $5, reservations available online at salvagevanguard.org/tickets and at the door the night of the performance.

The building is ADA compliant with accessible walkways and bathrooms.