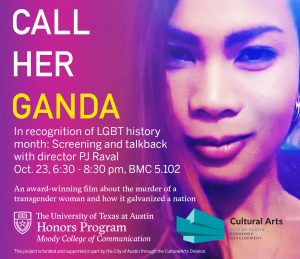 Screening and discussion on Oct. 23 with Director PJ Raval in recognition of LGBTQ history month.

When Jennifer Laude, a Filipina trans woman, is brutally murdered by a U.S. Marine, three women intimately invested in the case – an activist attorney, a transgender journalist and Jennifer’s mother – galvanize a political uprising, pursuing justice and taking on hardened histories of U.S. imperialism.

With nuance and depth, director PJ Raval chronicles the case of Jennifer Laude in his acclaimed documentary “Call Her Ganda.” In recognition of LGBT History Month, the Moody College Honors and Program is hosting a screening of the film and talkback with the director on Wednesday, Oct. 23, from 6:30—8:30 p.m.

PJ Raval is associate professor in the Department of Radio-Television-Film. His work explores the overlooked subcultures and identities within the already marginalized LGBTQ+ community. Named one of Out Magazine’s ‘OUT 100′ and IndieWIRE’s ‘25 LGBT Filmmakers on the Rise 2019’, PJ’s body of film work has been distributed widely internationally and has been supported by the Guggenheim Foundation, Bertha Foundation, Arcus Foundation, Sundance, Center for Asian-American Media, Tribeca Film Institute, Firelight Media, PBS, and the Ford Foundation. PJ is a 2015 Guggenheim Fellow, 2016 Firelight Media Fellow, 2017 Robert Giard Fellow, and a recent member of the Academy of Motion Picture Arts & Sciences.

The event is FREE and open to the public. It is sponsored by The Moody College Honors Program. This project is funded and supported in part by the City of Austin through the CulturalArts Division.