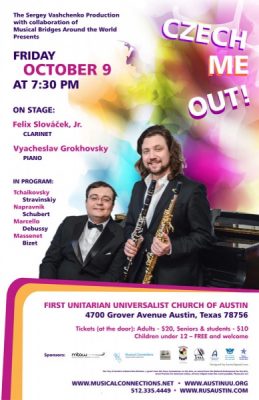 The Sergey Vashchenko Production with collaboration of Musical Bridges Around the World Presents “Czech Me Out!”, concert of Classical Music

Pianist Vyacheslav Grokhovsky, Jr. is a prizewinner of several international competitions including Cagliari in 2000 and Marienbad in 2003 among others. Vyacheslav performs extensively as a soloist and chamber musician and is a member of the E. Napravnik Piano Trio and chief director of the International Eduard Napravnik Music Festival in the Czech Republic. His international appearances include prestigious festivals in Italy, France, USA, Czech Republic, Germany and Russia. Son of preeminent Russian Composer Vyacheslav Grokhovski, he received his early music education in Moscow prior to immigrating with his family to the Czech Republic as a teenager. He holds a bachelor and a master’s degree from the Moscow Conservatory and Prague Academy of the Performing Arts and a doctorate from the Prague Conservatory.

Clarinetist Felix Slovacek, Jr. is heralded by the Prague Post as “The virtuoso phenomenon and the future of Czech entertainment.” He is a versatile and charismatic performer comfortably navigating the world of classical music and jazz as well as musical theater as a singer and actor. Son of legendary Czech clarinetist, band director and conductor Antonin Slovacek, Felix was exposed to a great variety of music in his early childhood and had the privilege of studying and performing alongside his internationally renown father. He holds a master’s degree from the Prague Conservatory and has been selected as the state soloist of the Karlovy Vary Symphony Orchestra. Additionally, since 2014 Felix has been a regular guest conductor with the Carlsbad Symphony Orchestra and is the Artistic Producer of the International Eduard Napravnik Music Festival in Prague.

To learn about upcoming SV Production shows or to obtain interviews or reviews, please contact Sergey Vashchenko at balalaika@sbcglobal.net or at (512) 656-6865.

Both of these artists perform out of a love for traditional music and classical elegance . Join us for an innovative and exciting  performance.

The City of Austin’s Cultural Arts Division, a grant from the Texas Commission on the Arts, an award from the National Endowment for the Arts, Great Promise for American Indian, all have helped make this event possible. Please join us!

Tickets (at the door):