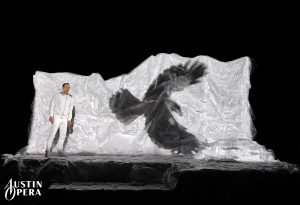 “We wanted to take this powerful musical story out of the recital hall and into a multi-faceted performance format that offers the listener a chance to experience the work visually, dramatically, and musically, but while also preserving the cycle’s inherent intimacy and subtlety,” says Moore. “It incorporates video that we shot in various locations throughout the country, including Times Square, the Bonneville Salt Flats, a cheap hotel room in Houston, a blizzard in Brooklyn, and a graveyard in Des Moines. It is a constantly evolving project. After presentations in NYC, Atlanta, Anchorage, Houston, and Des Moines, we continue to introduce new elements of video, set, and costume design for each new audience that sees it.”

Winterreise will be in the Austin Central Library. Performances will take place on March 28-29 and April 2-5 and will be sung in German with projected English texts.

*Patrons must be 8 years of age or older to attend.