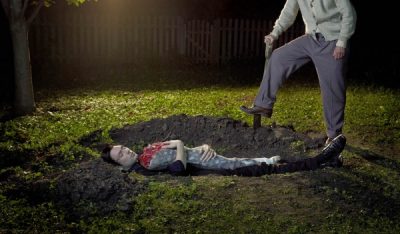 The directorial debut from multimedia artist Alyssa Taylor Wendt, HAINT is an experimental narrative feature film that tells the story of a young man in Berlin trying to survive at the end of World War II. The story is a surreal journey through his desires and fears, as he simultaneously confronts and bears witness to the slow unraveling of his mother and the neighbors. Speaking to our fear of death, HAINT examines the forces behind our will to survive and what price that may carry. This line between darkness and light blurs as the relationships and stability both dissolve, where the only constant and stable element is Mortality, played with great empathy and gothic beauty by the performance artist Joseph Keckler.

This film was originally designed as a three-channel video installation. The filmmaker is currently developing one channel of the production into a narrative feature to bring this vision to a wider audience and to develop the depth of the story itself. In development for four years, the project was greatly inspired by the conflicting stories her dying father told her about living through the end of the war in Germany and subsequently moving to America and serving as not only an architect, but supposedly an operative for the CIA. HAINT explores recent themes in her artistic process including monuments, decay, memory, cycles of history, perceived grandeur and parallel realities.

The film is due to be completed by November 2015.

ALYSSA TAYLOR WENDT (Director, Writer, Producer, Art Director- HAINT) works as a filmmaker and multimedia artist and lives in Austin, Texas. She has performed on record, in films, on stage and with art while living in the West and earned her MFA in 2008 from Bard College with the Directors Award. Evolving out of a photographic and video background, she now concocts films, installations and multimedia pieces that speak about an ongoing legacy and personal cosmology through ritual appropriations, experiential spaces, collaborative work and non-linear narratives. Showing in both national and international exhibitions, she has performed at envoy gallery, Location One, Fusebox festival, St. Cecilia’s and CoLab space, among many others, and completed residencies in both Iceland and Norway. This fall in Austin, she will be screening a sneak preview of her experimental non-linear narrative HAINT, participating in POP Austin, ArtBash, EAST studio tours and having a solo show at Women and Their Work. HAINT is her first feature and more of her work can be seen here: www.alyssataylorwendt.com

FREE and open to the public

Screening is at 7 pm sharp at the Co-Lab Projects popup gallery next to Big Medium. The artist/director will be on site at the event to answer questions and talk about her process after the screening.