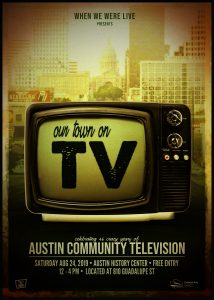 Our Town on TV

Presented by When We Were Live at Austin History Center

Since 1973, everyday Austinites have had the resources to create their own TV programs. While in production on When We Were Live, a feature documentary about the history of Austin Public Access Television, filmmaker John Spottswood Moore worked with the Austin History Center in building a catalog of hundreds of these access programs. From Banana-themed Drag queens to Spanish language educational programs to late night call-in shows, these tapes provide an extremely unique document of the diversity and evolution of our town over the last 5 decades.

The Austin History Center and When We Were Live invite you to attend an afternoon of nostalgia and fun at Our Town on TV. Come see access TV the way it was meant to be viewed! Multiple vintage television sets will be set up, with each set playing its own themed loop of footage from the Austin History Center’s Public Access Community Television Records and Video Collection (AR.2007.015). Featured footage highlights will include the music scene, local activism, LGBTQ issues, and “Old Austin.”

The event is free and open to the public. Light refreshments will be served. Newly designed posters for “When We Were Live” by Austin artists Matthew Stavrowsky and JP Pfertner will be available for purchase.

As the local history division of the Austin Public Library, the Austin History Center provides the public with information about the history, current events and activities of Austin and Travis County. The Center collects and preserves information about local governments, businesses, residents, institutions, and neighborhoods so that generations to come will have access to their history.

This event is supported in part by the Cultural Arts Division of the City of Austin Economic Development Department.

Exhibit will be ongoing and open to the public all day.  Visitors are free to arrive and enjoy the exhibit at their own convenience between the hours 12 pm and 4 pm.