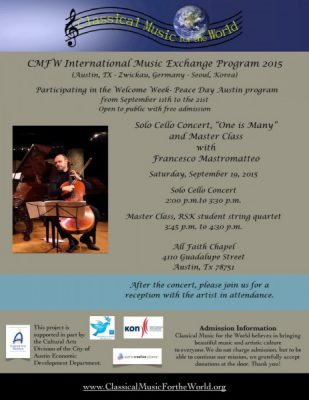 Solo Cello Concert, “One is Many” and Master C...

Solo Cello Concert, “One is Many” and Master Class with Francesco Mastromatteo

Described as a “virtuosic and passionate musician” by the Dallas Morning News, the Italian-born cellist Francesco Mastromatteo hasperformed as soloist with Meadows Symphony Orchestra in Dallas, Round Rock Sympnony, Balcones Community Orchestra, Orchestra Sinfonica “Città di Pescara”, Orchestra Sinfonica della Provincia di Foggia, the orchestra “Suoni del Sud”, Meadows Wind Ensemble and Starlight Symphony. He also performed J.S. Bach’s solo suites in the US and in Italy at the prestigious Ravenna Festival in 2009. He keeps a busy schedule as chamber musician and is now the cellist both of Trio Chénier, and of the Trio Mastromatteo. He performs in duo with pianists A. Wright, C. Wright-Ivanova and M. Schneider. He also collaborated in duo with A. Pompa-Baldi recording Grieg’s cello sonata op.36 for Centaur Records.

The program explores the immense beauty of the cello alone and its manyfold transformation. The folk music of Spain emerges in the Suite by Cassadò, while the folklore of Hungary explodes in the Sonata by Zoltan Kodàly and this national flavor gives the music an immense energy. What is most striking is to experience the imaginative power of  the cello sound, which embrace a range of colors apparently unlimited in both works and moves from the most tender themes, to energetic dramatic moments, from the deepest dark tone to the highest brilliant color. Between those two inspired works, a metal style solo piece written by Dallas based composer Kevin Hanlon. Yes a metal piece for solo cello….another task this unlimited instrument can face. Because with a cello “one is many”…too many.