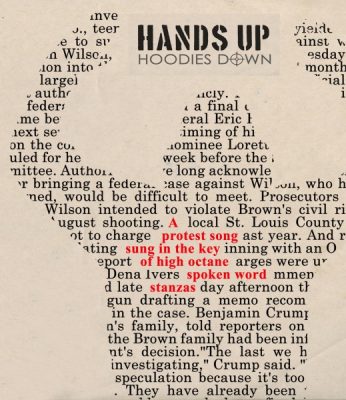 Hands Up Hoodies Down

“Hands Up Hoodies Down blends slam poetry, music, rap, movement, and improvisation together for a poignant piece with a message as loud and clear as the chants at rallies nationwide: #BlackLivesMatter”. —Austin Chronicle, March 2015

Hands Up Hoodies Down is a protest song sung in the key of high octane spoken word stanzas exploding through tears and heartache; it’s the balled fist full of possibilities; it’s the feeling of the day after the riot and no place to buy groceries; it’s the mother’s moan and the father’s wail. How do we react when human beings are taken out of existence?

Hands Up Hoodies Down is the return of this critically-acclaimed hip hop theatre and dance piece for our times, originally presented at The VORTEX last March.  Conceived, directed, and co-written by Zell Miller III, with contributions from Chelsea Manasseri. Choreography by Sadé Jones. The cast features T-Fly, Kann, Da’Shade Moonbeam, Zell Miller III, Chelsea Manasseri, Sadé Jones, and the Ashé Arts Collective.

Limited free tickets for each performance in the spirit of sustainability, accessibility, and the gift economy. Radical Rush tickets released at 7pm each night–in-person only. 2-for-1 admission Thursdays with donation of 2 cans for SafePlace.

Hands up Hoodies down is funded and supported in part by VORTEX Repertory Company, by a grant from the Texas Commission on the Arts, and by the Cultural Arts Division of the City of Austin Economic Development Department.