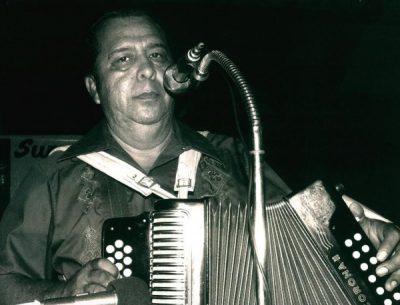 The Texas Music Museum will hold a reception honoring three important Austin-area figures within Texas music on Sunday, July 19th, at 4 pm. At the ceremony, the TMM will present Texas Distinguished Musician Awards to Paco Rodriguez, Leticia Rodriguez, and Johnny Degollado for their seminal contributions to our state’s musical heritage. The awards will be given in conjunction with the museum’s current exhibit “Tejano Orquestas and the Great Tejana Singers.” In addition to playing in the bands of Alfonso Ramos and Roy Montelongo, Paco Rodriguez has led orquestas around Austin since the early 1970s.  He recorded for Joey, Freddie, and Hacienda records between the late 1980s and early 2000s and currently plays with his group “Los A-T Boyz.” Leticia Rodriguez, the niece of the famous San Antonio singer Eva Garza, is a powerful vocalist in her own right and has been active in music and dance in Central Texas since the late 1970s. Her tribute album to Garza was recently covered on the PRI radio program The World. Degollado, the protégée of local legend Camilo Cantu, has been a cornerstone of conjunto music in Austin since the 1950s. The reception will be held at 1009 E. 11th St. and is free and open to the public. The exhibit will be on display until December 2015.