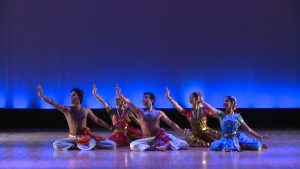 SAMYOGA is a dance portrayal of the three Indian great epics of Kumarasambhavam ( Sanskrit)), Ramayan ( Tamil) and Bhagavatam ( Telugu). The ballet will portray the weddings of Rama ans Sita, Siva and Parvathy and Rukmini and Krishna

Dark and Light; Day and Night; Good and Bad; Positive and Negative; Craving and Aversion; Union and Separation; Yin and Yang; Shiva and Shakti. The concept of polar opposites, as a philosophical cornerstone, resonates across many cultures. It often defines the boundaries against which emotions, virtues, character, and, indeed, life itself, is viewed and understood. This is the primeval concept which is to be portrayed through this production, using the sentiment of Shringara, or love, as the medium. ShijithNParvathy have drawn their material from three great epics in three classical Indian languages: •Rukmini Kalyanam from the Bhagavatham in Telugu, •Kamba Ramayanam in Tamil, •Kumarasambhavam in Sanskrit In each of these three pieces, the sentiment of Shringara in its many forms, is highlighted through the characters and personalities of three divine couples: Rukmini and Krishna, Sita and Rama, and Parvathy and Shiva, respectively. Music Director: Sr. Rajkumar Bharathi Bhagavathu

The Bhagavata Purana , a revered text in Vaishnavism, presents a form of religion (dharma) that competes with that of the Vedas, wherein bhakti ultimately leads to self-knowledge, liberation (moksha) and bliss. It also asserts that the inner nature and outer form of Krishna is identical to the Vedas and that this is what rescues the world from the forces of evil. Kumārasaṃbhavam (Sanskrit) is an epic poem by Kālidāsa,,widely regarded as one of Kālidāsa’s finest works, a paradigmatic example of  kavya poetry Kumarasambhava basically talks about the birth of Kumara (Kārtikeya), the son of Shiva and Parvati. Ramayana is one of the two major Sanskrit epics of ancient India, the other being the Mahābhārata. Along with the Mahābhārata, it forms the Hindu Itihasa. The epic, traditionally ascribed to the Hindu Valmiki, narrates the life of Rama, the legendary prince of the Kosala Kingdom

This is a one day show only