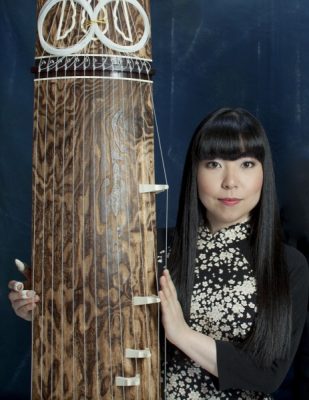 The featured performers are Yoko Reikano Kimura (koto) and James Nyoraku Schlefer (shakuhachi). This is a rare opportunity to see an intimate Japanese traditional musical performance in Austin.

Reserve online before the concert.
Seating is on a first come first served basis.
Tickets are also available at the door  ($15)    Donations are greatly appreciated

Yoko Reikano Kimura is Koto/Shamisen performer and singer, Yoko was praised as “superb” by the New York Times.  Following her studies at Tokyo University of the Arts, the NHK School for Young Professionals and the Institute for Contemporary-Traditional Japanese Music at Senzoku Gakuen College of Music where she currently holds a teaching position, she was awarded a scholarship from the Agency of Culture Affairs of Japan.  Her teachers include Kono Kameyama, Senko Yamabiko (Living National Treasure) and Akiko Nishigata.

Yoko has won numerous awards, including the First Prize at the prestigious 10th KenjunMemorial National Koto Competition and at the 4th Great Wall International Music Competition.  She has performed extensively throughout Japan, the US, Europe, Asia, Middle East and South America.  In 2004, she performed Shamisen concerto at the National Olympic Memorial Center in Japan.  In 2013, she premiered the 13 string-Kotoversion of Daron Hagen’s Koto Concerto: Genji with the Euclid Quartet. Iin 2014, she performed with the Prairie Ensemble.

Since 2008 she has performed with her husband, Hikaru Tamaki, a cellist.  Under the moniker ‘Duo YUMENO’, they have been creating a singular fusion of sound and exploring the dialogue between classical Japanese and western music.  In 2014 they were awarded the Chamber Music America Classical Commissioning Program grant, and in 2015, received the Aoyama Music Baroque Saal Award. Their debut CD featuring Marty Regan’s works was leased in May 2015.

James Nyoraku Schlefer is a Grand Master of the shakuhachiand one of only a handful of non-Japanese artists to have achieved this rank.  He received the Dai-Shi-Han (Grand Master) certificate in 2001, and his second Shi-Han certificate in 2008, from the MujuanDojo in Kyoto. He has performed at Carnegie Hall, Lincoln Center, the Kennedy Center, Tanglewood and BAM, as well asmultiple venues across the country and in Japan, Indonesia, Brazil and Europe.

Mr. Schlefer first encountered the shakuhachi in 1979, while working towards a career as a flute player and pursuing an advanced degree in musicology at CUNY (Queens College.) Today, he is considered by his colleagues to be one of most influential Western practitioners of this distinctive art form.  In February 2014, Concertonet.com gave him the accolade of “America’s finest Shakuhachi player”.  As a composer, Mr. Schlefer has written multiple chamber and orchestral works combining Japanese and Western instruments as well as numerous pieces solely for traditional Japanese instruments.

He is the Artistic Director of Kyo-Shin-An Arts and the curator for the Japanese music series at the Tenri Cultural Institute in NYC.  He teaches shakuhachi at Columbia University, a broad spectrum of Western and World music courses at New York City Technical College (CUNY), and performs and lectures at colleges and universities throughout the United States.

Tickets available at the door ($15)