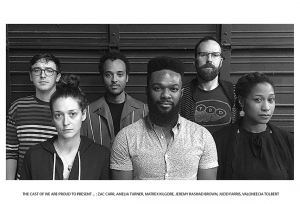 WE ARE PROUD TO PRESENT A PRESENTATION ABOUT THE H...

An idealistic young theatre ensemble, comprised of 3 Black actors and 3 White actors attempts to tell the story of the little-known first recorded genocide of the 20th century. What could go wrong?

WE ARE PROUD TO PRESENT a Presentation About the Herero of Namibia, Formerly Known as Southwest Africa, From the German Sudwestafrika, Between the Years 1884–1915

Street Corner Arts bring you WE ARE PROUD TO PRESENT A PRESENTATION ABOUT THE HERERO OF NAMIBIA, FORMERLY KNOWN AS SOUTHWEST AFRICA, FROM THE GERMAN SUDWESTAFRIKA, BETWEEN THE YEARS 1884-1915 by Jackie Sibblies Drury playing at Hyde Park Theatre from November 30 thru December 15. Ms. Drury’s stunning, self-referential theatrical collage tackles the subject of racism and the theatre community’s own (sometime self-serving) attempts at engaging with this subject matter. To helm this ambitious show, SCA has brought back Liz Fisher, director of SCA’s 2016 production of CONSTELLATIONS and recent recipient of the prestigious 2018 Princess Grace Award in Theatre.

An idealistic theatre ensemble comprised of 3 black actors and 3 white actors rehearses a devised piece that tells the little-known story of what is regarded as the first genocide of the 20th century, an outrage perpetrated by the German Empire upon the Herero and Nama indigenous peoples of German Southwest Africa (now Namibia). But as the ensemble seeks to find a unified voice and common ground, their own cultural proclivities and prejudices threaten to boil over and devolve their idealism into an all-too common cataclysmic outcome. Hilarious and audacious in its telling, audiences should expect to laugh so hard it will hurt, but for many, probably uncomfortably so.

Here’s what others have said about Ms. Drury’s bold and important work:

“incendiary” “inventive” “impressively navigates the tricky boundaries that separate art and life, the haunted present and the haunting historical past” – The New York Times

All other shows Thursday, Friday & Saturday nights at 8pm