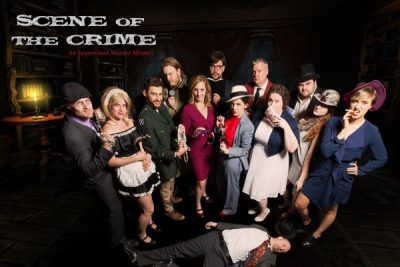 Scene of the Crime

Saturdays at 8pm this May and June, the Hideout Theatre presents Scene of the Crime, a completely improvised murder mystery.

Inspired by the works of Agatha Christie, a group of eccentric characters are gathered in an isolated location, a murder is committed, and all are suspects. An intrepid detective, either by design or circumstance, is enlisted to investigate. Along the way, twists and turns abound until the murderer is unmasked, and justice is served… or is it?

Join our top flight cast of improv comedians as they, with no script in sight, weave a tangled web of dark secrets and hidden agendas—ah, but who’s the spider and who’s the fly? Find out when the final shocking revelation sends you gasping into the night!