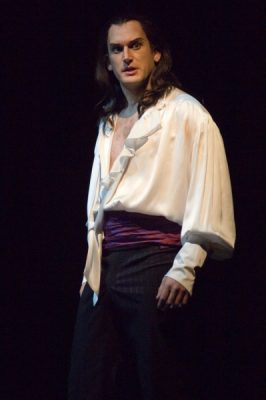 Presented by Austin Opera at The Long Center: Michael and Susan Dell Hall

The ultimate ladies’ man seduces the wrong woman, and her father returns from the grave to bring Giovanni to his destiny. Morgan Smith, a seasoned Giovanni, takes the stage in this fiery Austin favorite.

Morgan Smith, baritone – Smith takes the title role of Don Giovanni in April 2015. A graduate of Columbia College and Mannes College of Music in New York City, Smith became a member of the Seattle Opera young artist program in 1999 where he remained for two seasons, during which time he made his professional debut as Donald in Billy Budd, and where he sang roles such as the title role Don Giovanni, Silvio in I Pagliacci, Riccardo in I Puritani, and Peter Niles in Mourning becomes Electra.

Morgan Smith made his European debut in the 2009-2010 Season at Berlin Staatsoper as Marcello, and at Oper Leipzig as Rossini’s Figaro, Papageno, Marcello, Leandre The Love for Three Oranges and Whitelaw Savory One Touch of Venus.

Recent successes include his return to San Francisco Opera for the role of Starbuck in Jake Heggie’s Moby-Dick, a role he inaugurated for the world premiere at Dallas Opera and later sang at San Diego Opera.

Mourning Becomes Electra, Florida Grand Opera”Baritone Morgan Smith as Adam Brant has a beautiful voice and was given the opportunity to sing the best aria in the production, “Too weak to kill the man I hate.” His voice, coupled with his extreme good looks, made him the perfect lover/villain for the piece.” Edge Boston, November 2013

The Long Center for the Performing Arts, Austin, TX 78704