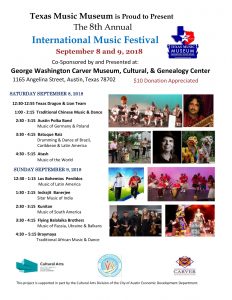 The Festival celebrates and promotes appreciation for the diversity of authentic internationally–specific music and dance performed by accomplished Texans and using distinctive traditional instruments.

Texas Music Museum invites you to attend the Texas Music Museum 8th Annual International Music Festival on September 8 and 9, 2018, which is co-sponsored by and held at the George Washington Carver Museum, Cultural and Genealogy Center located at 1165 Angelina Street, Austin.

The Festival features diverse accomplished Texas performer of authentic international–specific music/dance & distinctive traditional instruments which promotes appreciation of the music from many cultures that are now part of the Austin & Texas ethnic fabric, including: Asia, Africa, Eastern Europe, the Indian sub-continent, Latin/Central/South Americans, and the Middle East.

The annual festivals are well attended, and feedback each year from attendees is overwhelmingly positive. There is no cost to attend the Festival, but a $10.00 donation per person is suggested and appreciated. For more information, call 512-203-4875.

The Festival is free, but donations are appreciated, with the recommended donation amount of $10.00 per adult.