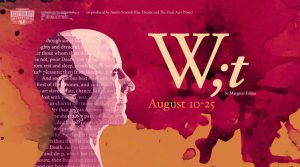 Austin Scottish Rite Theater teams up with The Final Acts Project to present Margaret Edson’s dark comedy, Wit. Taking the role of both narrator and player in her own tragedy, the character Vivian Bearing shifts from real time to the past through her journey from stage 4 ovarian cancer diagnosis and high-dosage experimental chemotherapy. Along the way, she undergoes self-conviction, humility and grace.

Each show will be followed by a discussion with guest speakers from the health professions.

Funded in part by the St. David’s Foundation

One of the co-founders of the Long Center, Jo Anne Christian was one of Austin’s most prominent civic leaders, and a good friend to the arts. This production of WIT will honor Jo Anne Christian for her dedication and support of the great cultural and artistic growth on Austin on opening night, August 10.