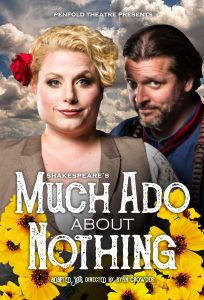 Much Ado About Nothing

Presented by Penfold Theatre Company at Round Rock Amphitheater

In Shakespeare’s romantic and razor-witted comedy, the soldiers may be returning victorious from war, but the merry sparring – and sparks – between the stubborn bachelor Benedict and self-assured Beatrice have only just begun!

Shakespeare’s highly celebrated, romantic and razor-witted comedy gives us the battle of the sexes as a delicious war of words, striking hilarious chords and revealing timeless truths about love, change and acceptance.

Penfold’s production of this much beloved comedy is set on the Texas frontier, featuring live music and a trimmed-down cast of six virtuosic performers.

It also marks the eighth installment in the company’s “Penfold in the Park” series, an annual offering of free, outdoor summer theatre, made possible by a partnership with the City of Round Rock Parks & Recreation Department.