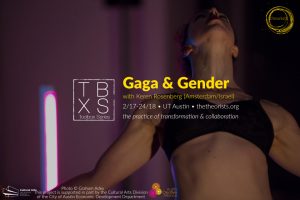 Gaga, Gender, and Choreographic Toolbox with Keren Rosenberg. Every day we will start with a Gaga/dancers classes followed by a movement and choreographic research in dialogue with gender, identity, and a sense of unblocked belonging.

Keren is a choreographer, Dancer and Certified Gaga teacher based in Amsterdam The Netherlands. She studied in The Jerusalem Dance Academy and in The Academy of the Kibbutz dance Company from which she continued to dance for several high-profile Israeli companies, among which are Idan Sharabi & Dancers (NDT/Batsheva), Ido Tadmor Dance Company (Israeli Ballet/Batsheva), Fresco Dance Company and Tami Dance Company. She is the recipient of Keren Sharet award for young and promising dancers (IL).

Her work Body-House was Produced by Dansataliers, Rotterdam as a part of one night’s dance. Subsequently invited to perform in Korzo Theater, Den Haag, Dansmakers Amsterdam as well as in Vondelpark openlucttheater. She is presently collaborating with a Swedish based choreographer Graham Adey on new work called Gender Fu**[er] that premiered in the autumn of 2016 in Sweden and Holland produced by Production house In-discourse Malmo and highly acclaimed reviews from Sadler’s Wells.

​In 2011 she was invited by Ohad Naharin to study the Gaga movement language and become a certified teacher. Since then She has been invited to teach Gaga and her Choreographic practice in the highest Professional institution and dance Companies such as: Scapino Ballet (NL), Skanes dance Theater (SE), Oldenburg dance company (DE), Henny Jurriens Stichting (NL), Dansateliers (NL), Codarts Dance Academy (NL) Fontys Academy(NL), CDSH Dance Academy (DE) La Cantera , (MX), CCNG Grenoble(F), DAF (IT), Dance-Base Edinbrough and many more.

Email Lillie Burgess at finance@amarts.org to apply for our competitive apprenticeships