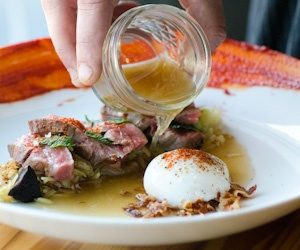 About Foreign and Domestic

From the design of the restaurant to the seasonal and frequently changing menu, Ned and Jodi have developed a neighborhood eatery that encompasses their passion for bringing inventive culinary creations to the table in an accessible yet sophisticated way.

Ned and Jodi got married in New York City in 2003 and moved to Portland, Oregon a few years later to settle down and start a family. Together they both worked at Genoa and helped open The Nines Hotel. Upon the birth of their daughter Billie Van in 2008, they realized they wanted to be closer to family and Austin’s warm weather and emerging food scene was an enticing draw. Ned and Jodi moved to Austin in May 2009 and opened Foreign & Domestic Food & Drink in May 2010.