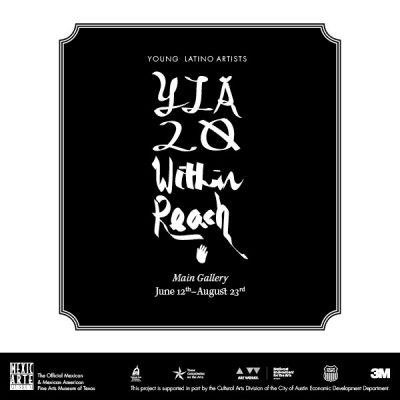 The Young Latino Artists (YLA) exhibition has historically provided Latina/o artists under the age of thirty-five with professional-level museum experience and exposure. Now in its twentieth year, YLA 20: Within Reach is guest curated by visual artist Ricky Yanas. Mestizaje, as Chicana activist and writer Gloria E. Anzaldúa defined the term, is a border consciousness that

The Young Latino Artists (YLA) exhibition has historically provided Latina/o artists under the age of thirty-five with professional-level museum experience and exposure. Now in its twentieth year, YLA 20: Within Reach is guest curated by visual artist Ricky Yanas. Mestizaje, as Chicana activist and writer Gloria E. Anzaldúa defined the term, is a border consciousness that comes from “all different cultures of Latin America, people of color and also Europeans.” Unlike the myth of the American “melting pot”, Mestizaje embraces contradiction and plurality, emphasizing the act of cultural mixing and transition as key to its understanding.

YLA 20: Within Reach embodies this philosophy by interweaving a multitude of artistic practices and ideas, finding points of intersection and divergence in a garden of objects, images, and flora. This exhibition brings together stand-alone and site-specific works by nine Chicana/o, Tejana/o, Mexicana/o, and Puertorriqueña/o artists focusing on acts of negation/destruction and reinterpretation/revitalization, highlighting the generative space between these conflicting ideas. Through processes of collage, archiving, and personal and environmental exploration, these artists are beginning to break down the alienating messages produced by dominant corporate culture, finding new symbols and mythologies in their own personal histories and the physical space around them. The title of the exhibition, Within Reach, refers not only to the proximity of these artists to their materials and subjects, but also to a future free of corrosive mainstream influences, driven by trust in one’s own cultural heritage and experience.

The exhibition was conceived as a garden—literally and metaphorically—where images, objects, and ideas mix and converse. The potted plants contrast against the space of the Museum and the artworks, echoing a possibility of personal and political growth from a place between nature and artifice. We encourage visitors to bring their own potted plants so that they may be incorporated into the exhibition.

The second exhibition is Serie Project: Special Edition, featuring special, limited edition prints from artists who participated in the Serie Project Program. For 20 years, the Serie Project has upheld their mission by continuously collaborating with both established and emerging artists from all backgrounds and mediums to help them achieve their individual aspirations through the art of serigraphy. During this time, the Serie Project has continued to promote awareness of cultural diversity and its importance in the community through the production of the Special Editions. Special Editions were produced separately from the “Serie Editions” and these Special Editions originated from commissions, invitations, special projects, or separate portfolios. Each artist had a unique opportunity to learn or enhance their serigraphy technique and collaborate with the Master Printers at Coronado Studio to create an original limited edition of up to 50 prints. Artists have addressed issues of race, immigration, class, sexuality and gender in their artwork, in addition to approaching formal and conceptual aspects of serigraphy itself. As a result, the Serie Project collection exhibits a broad range of artistic themes and multicultural wealth.

Incorporating methods from his BRILLO and Tiomock series, YLA 20 artist, Isaiah Carrasco will conduct a screen printing workshop, with an emphasis on appropriation as communication and collective activity.

Carrasco, a design major at Texas State University, San Marcos, will use this program to instruct participants on basic screen printing techniques and color theory.  Participants, under the guidance of the artist, will design and print a single large canvas utilizing alternating patterns of imagery borrowed from the Museum and Carrasco’s own library.  The completed banner/flag will be displayed within the YLA 20 exhibition.

Recalling Memory through Objects and Sound
Presented by Tamara Becerra Valdez
Date:  Saturday, June 27, 2015 from 1:00 – 3:00 PM
Admission:  $5 or FREE with the donation of a plant

Expanding on her Archive of Ephemera (a collection of objects that sometimes appears in and informs her work), YLA 20 artist Tamara Becerra Valdez will invite guests from the Austin community to join her for an afternoon of collecting and recording memories.

During this event/workshop, participants will be asked to bring an object of significance that recalls an important memory of association in their lives.  The program will deal with larger themes from the exhibition of highlighting cultural heritage and personal history.  The objects brought in will be photographed and participants will be asked to contribute a sound recording recalling the memory associated with the object.  All images and recordings will be uploaded onto the Museum’s Tumblr page extending the exhibition beyond the gallery walls.