Presented by Ameripolitan Awards Production at Stateside at the Paramount, Austin TX 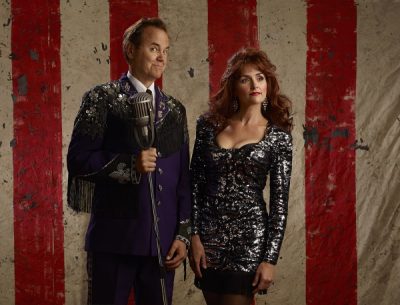 Ameripolitan Awards Productions announces the addition of critically acclaimed The Doyle & Debbie Show to the Ameripolitan Music Awards weekend celebration. Created by Bruce Arntson, and starring Bruce Arntson, Jenny Littleton and Matt Carlton, The Doyle & Debbie Show will run two days before the awards at Stateside at the Paramount, on February 14-15, 2016 at 7pm. Tickets available at austintheatre.org, the Paramount Theatre box office, and by phone at (512) 474-1221.

Ameripolitan Awards Productions announces the addition of critically acclaimed The Doyle & Debbie Show to the Ameripolitan Music Awards weekend celebration. Created by Bruce Arntson, and starring Bruce Arntson, Jenny Littleton and Matt Carlton, The Doyle & Debbie Show will run two days before the awards at Stateside at the Paramount, on February 14-15, 2016 at 7pm. Tickets available at austintheatre.org, the Paramount Theatre box office, and by phone at (512) 474-1221.

Doyle Mayfield, an old-guard country star with a handful of hits back in the 70s and 80s, is reviving his career thirty years, four wives, and three Debbies later. The new Debbie, a single mother with three children, sees this lovable lothario as her last chance to make it big in Nashville – but she also questions hitching her star to this loose cannon.

The Doyle & Debbie Show – featuring all-original songs – is sublime homage and parody, simultaneously idolizing and lampooning country music’s tradition of iconic duos and the battle of the sexes that accompany them. Bruce Arntson and Jenny Littleton take audiences on a freewheeling joyride through a wickedly funny script and score – all delivered with utmost sincerity.

Dale Watson explains why Ameripolitan Awards Productions wanted to bring The Doyle & Debbie Show to the Ameripolitan Festivities, “There was a time when the comedians of what was Country Music were as important as the singers. Minnie Pearl comes to mind, as does Jerry Clower. Some even sang and played like Grand Pa Jones and June Carter. The Doyle & Debbie Show is funny and musically superb. It is a play, it is a concert and it is fantastic. With its roots showing proudly, it’s a perfect way to kick off Ameripolitan Week in Austin.”

The Doyle & Debbie Show has developed a rabid cult following in Nashville, with many fans who have seen the show over a dozen times – everyone from theatre-going professionals to college students who wouldn’t be caught dead in a theater or a country bar. The show was first performed in June 2006 in Nashville, TN. The Doyle & Debbie Show opened in the legendary Bluegrass venue, The Station Inn, in October 2007, where it has been playing Tuesday nights ever since. Doyle and Debbie have performed in a variety of venues around the country, including two appearances on NBC’s Late Night with Conan O’Brien.

Creator and star Bruce Arntson led his first rock band at the age of 13 and spent years as a bandleader or sideman (keyboards and sax) before writing thematic songs for the Emmy Award- winning kids’ show, Hey Vern, It’s Ernest, which became his training ground for film scoring (Touchstone/Disney), television writing (Saturday morning CBS show) and screenwriting. He has composed and performed with Tennessee Repertory Theatre, Tennessee Dance Theatre, Dark Horse Theatre, and others. He co-wrote, composed songs and score, and starred in the cult musical feature Existo, based on his stage act, which won numerous “Best Feature” and “Audience Choice” awards on the festival circuit. It was during his time working for the CMT show Inside Fame that he conceived The Doyle & Debbie Show.

“My experience writing for Country Music Television’s Inside Fame, along with frequent backstage visits to The Grand Ol’ Opry, became the basis for Doyle & Debbie,” says creator Bruce Arnston. “It’s my impulse to make fun of everything—and it comes naturally for me to satirize the country music scene, but I do it with respect for the people and especially the music. I’ve been honored to have many former Opry stars and musicians, including George Jones, and current Country stars, see The Doyle & Debbie Show.”

Tickets to The Doyle & Debbie Show are $20 and available at www.austintheatre.org. For updates and breaking news, please visit Ameripolitan.com as well as the Ameripolitan Awards social networks on TWITTER and FACEBOOK.  Learn more about Doyle & Debbie at www.doyleanddebbie.com.

Critics have raved about The Doyle & Debbie Show:

“…a gloriously tacky send-up of a washed-up country duo.”

“The Doyle & Debbie Show is like Spinal Tap with a twang, and it manages to tweak and tickle without ever denigrating country music.”

“It is akin to George and Tammy doing a night at the Grand Ol’ Opry – only on mescaline.”

“Littleton has a terrific voice that can evoke everyone from Patsy Cline to Dolly Parton.”

Ameripolitan is a new music genre with prominent roots influence. It is broken into four related subcategories: Honky Tonk, Western Swing, Rockabilly and Outlaw. Artists and bands can fall into one or more of these categories. Musical and lyrical creativity is critical but to be considered Ameripolitan music, it must retain some of these traditional elements as well.

Stateside at the Paramount