Speech and Debate By Stephen Karam 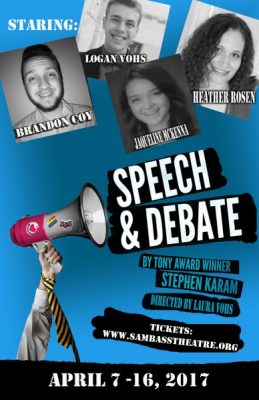 Opening Night and Champagne After Party: $25.00

Round Rock, Texas–TICKETS ARE NOW ON SALE FOR SPEECH AND DEBATE

About SPEECH AND DEBATE–When the Republican

Opening Night and Champagne After Party: $25.00

Round Rock, Texas–TICKETS ARE NOW ON SALE FOR SPEECH AND DEBATE

About SPEECH AND DEBATE–When the Republican mayor of Salem, Oregon, is caught in a sex scandal involving underage boys and the Internet, a local high school student sits up and takes notice. Intelligent and aggressive Solomon, a nerdy, single-minded teen with ambitions of journalism, wants to investigate homophobic closeted men in positions of power in the state capitol, whether or not they are actual politicians. Howie, a gay high school senior who has transferred from Portland, is disgusted by the comparatively Puritan culture of Salem, in which he can’t get a Gay-Straight Alliance sponsored at school–but he can get picked up by a teacher in a chat room. Dramatic, determined Diwata, a frumpy young diva with adult burdens and a grudge against the drama teacher who refuses to cast her, is the nervous witness to an illicit student/teacher encounter. When the three students realize that they each have a piece of the same scandalous puzzle, purposes are double and triple-crossed, conversations explode, secrets are bartered, and ultimately, in spite of themselves, an alliance is formed. Tony Award-winner Stephen Karam’s Speech and Debate is a snappy dark comedy, sarcastic yet sincere, a genuinely hilarious and emotional story of misfit teens who explore sexuality, identity, and personal power as they learn to deal with misunderstanding and dismissal from the adult world.

Sam Bass Theatre is excited to present Speech and Debate as part of our inaugural “Select Series,” which is focused on bringing new and unusual theatre to the greater Austin area. This production of Speech and Debate will be directed by Laura Vohs, who has been a part of Sam Bass Theatre for many years now, directing many of our shows for young audiences and families, including The Secret Garden, The Complete Works of William Shakespeare Abridged, and ‘Twas The Night Before Christmas (which was named Best Play in Round Rock in 2015). Mrs. Vohs has been involved in every aspect of running Sam Bass Theatre for the past 10 years, doing everything from costume design to running the box office, as well as serving as president of the organization. When asked why Mrs. Vohs took on this particular show, she said, “I love this show not just for the outward storyline, but for what is going on underneath. Karam is a brilliant writer who really has a grasp of how adolescents talk and interact with one another. I can read through this script and hear my own teens, or the youth-guild kids I work with, talking to each other. I also love this play for the brilliance of how it shows that period between childhood and becoming an adult. The teens in this show are determined to handle an extremely adult matter on their own, and they do it with all the heroism children still have, while learning the ins and outs of adulthood.”

Laura Vohs is passionate about empowering young people to reach for the stars and to grow as artists, which is one of the reasons she felt drawn to this opportunity. Mrs Vohs explained that, “We are still battling prejudice in this world, including that against homosexuality. All people should be free to be themselves and not worry about the repercussions from society.” This show is filled with great opportunities to open up a dialogue that will allow people to discuss the coming of age and current events in a new way.  Director Vohs encourages audiences to see this show because, “The important subject matter itself is reason enough to see the show. Plus, this play has been made into a movie that opens April 7, and Lin-Manuel Miranda has been cast in the film adaptation. Just as it is best to read the book before seeing a movie, it is best to see the play before seeing the movie.”

Speech and Debate is directed by LAURA VOHS and SARA DESOTO as Assistant Director with Technical Direction by ERIC NELSON. The production features Scenic Designs by LAURA VOHS with SARA DESOTO as Costume Designer with JOHN PAUL GUERRA as Stage Manager. SPEECH AND DEBATE IS PRODUCED WITH SPECIAL ARRANGEMENT BY DRAMATISTS  PLAY SERVICE.

Recommendation: This show is rated PG-13 for some adult language and mature themes
Run Time: Approximately two hours, including one intermission