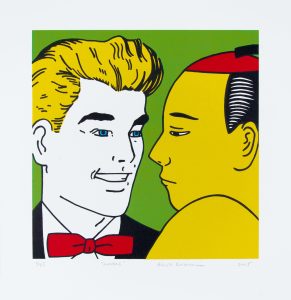 Lovebroke presents works by three artists, Annie Bissett, Curlee Raven Holton and Roger Shimomura, addressing romance from the perspective of those who have been historically excluded from Hollywood style happy endings. Pulling from their own experience, each artist invokes traditional printmaking techniques to upend cliches of courtship.

Annie Bissett is a Providence, RI based artist who works in the traditional Japanese woodblock technique known as mokuhanga. Her decade long print series I

Lovebroke presents works by three artists, Annie Bissett, Curlee Raven Holton and Roger Shimomura, addressing romance from the perspective of those who have been historically excluded from Hollywood style happy endings. Pulling from their own experience, each artist invokes traditional printmaking techniques to upend cliches of courtship.

Annie Bissett is a Providence, RI based artist who works in the traditional Japanese woodblock technique known as mokuhanga. Her decade long print series I Was a 20th Century Lesbian charts the trajectory of the lives of Queer people since the mid-20th century and celebrates the progress of liberation. The project is structured in four chapters, three of which are represented in the exhibition. The first, The Curse, features images of isolation, exile, and excommunication. The second, Counterspells, celebrates organizations that brought Queer rights forward in the second half of the 20th century. Lovebroke is proud to include the first completed work in the final chapter, a series of momigami quilts collectively titled Lovers & Friends.

Bissett’s woodblock prints have been exhibited in a number of printmaking venues including Boston Printmakers Biennial, Los Angeles Printmaking Society, the Robert Blackburn Printmaking Workshop, the Print Center in Philadelphia, IPCNY, and the International Mokuhanga Conference in Kyoto Japan. Bissett’s work has received critical attention in Printmaking Today, The Stranger and the Washington Post, and her work is featured in April Vollmer’s book Japanese Woodblock Print Workshop. She has been an instructor at Zea Mays Printmaking Studio in western Massachusetts since 2009.

Printed while on an artist’s residency in Venice, Italy, Curlee Raven Holton’s intaglio collection, Behold The Moor of Venice, brings a fresh perspective to Othello, Shakespeare’s classic tragedy of interracial love. The richly adorned sepia-toned works center the doomed relationship between Othello and Desdemona, leaving the interference of Iago off stage.

Curlee Raven Holton is the founder of the Experimental Printmaking Institute, Raven Fine Art Editions and recipient of the 2015 Anyone can Fly Foundation lifetime achievement award. Holton’s exhibitions have included prestigious national and international venues, such as Egypt’s Seventh International Biennale, Taller de artes Plásticas Rufino Tamayo in Oaxaca, Mexico, the Cleveland Museum of Art, and the Whitney Museum of American Art. His work is in many private and public collections, including the Cleveland Museum of Art; the Discovery Museum of Art and Science in Bridgeport, CT; the West Virginia Governor’s Mansion; the Foundation of Culture Rodolfo Morales in Oaxaca, Mexico; Yale University Art Gallery; Pennsylvania Academy of the Fine Arts, Pennsylvania; and the Library of Congress.

Roger Shimomura’s Lovers and Mix and Match series presents couples on the verge of embrace. Known for works that fuse pop art, the appropriated traditions of Japanese ukiyo-e woodblock prints, comic book characters and other pop culture symbols to deliver barbed messages about stereotyping and racism in America, these pieces by Shimomura can be viewed as incendiary, instructive or both. They reflect what has been called a lighthearted approach to the serious themes of xenophobia, racism, and cross-cultural interface. The pieces appear courtesy of the Lawrence Lithography Workshop.

A third-generation Japanese American, Roger Shimomura creates paintings and performance pieces blending an ironic mixture of Japanese imagery and American popular culture. He and his family were removed to an internment camp for Japanese Americans during World War II. Over the past decade, much of Shimomura’s work has been devoted to exploring the emotional and psychological hardships of the internment experience, based on the diaries of his grandmother.  Shimomura has had over 100 solo-exhibitions of his paintings and prints, as well as presented his experimental theater pieces at major venues across the country. He is the recipient of over 30 grants, including 4 National Endowment for the Arts Fellowships in Painting and Performance Art. Shimomura has been a visiting artist and lectured on his work at over 200 universities and art museums across the country.

Curated by: Veronica Ceci (formerly curating under the moniker Flash Collective) and Amanda Linn McInerney, the exhibition will be on display at ICOSA Gallery as part of PrintAustin from January 20th-February 18th 2023. In addition to the opening reception on January 20th, two social events for the Queer community will occur as part of the exhibition programming. On February 11th, a Valentines themed mingle for the A- and Demi- sexual community will be held. On February 18th ICOSA will host a mixer for local Queer visual artists.