Lexus Broadway in Austin Presents THE SOUND OF MUSIC 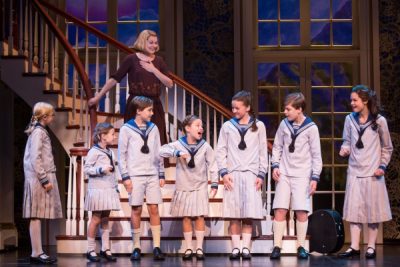 Lexus Broadway in Austin presented by Texas Performing Arts is proud to announce that the national tour of THE SOUND OF MUSIC premiers February 23 – 28, 2016 at Bass Concert Hall.

The brand new production of THE SOUND OF MUSIC is directed by three-time Tony Award® winner Jack O’Brien. This lavish new production launched this September at the Ahmanson Theatre in Los Angeles, under the auspices of the Center Theatre Group, and will then tour North America for multiple seasons, playing

Lexus Broadway in Austin presented by Texas Performing Arts is proud to announce that the national tour of THE SOUND OF MUSIC premiers February 23 – 28, 2016 at Bass Concert Hall.

The brand new production of THE SOUND OF MUSIC is directed by three-time Tony Award® winner Jack O’Brien. This lavish new production launched this September at the Ahmanson Theatre in Los Angeles, under the auspices of the Center Theatre Group, and will then tour North America for multiple seasons, playing multi-week and week-long engagements.

And introducing Jack O’Brien’s brand new discovery, KERSTIN ANDERSON as Maria Rainer.  A current student at Pace University, Ms. Anderson won the coveted role from hundreds who auditioned.  This will be her first national tour.

“I’ve always believed Maria was a “star-making” part, rather than the leading role we remember from the movies; so I went looking for someone with star-making magic,” says director O’Brien.  “And in through the audition door one day walked Kerstin Anderson, still studying at Pace University in New York.  She opened her mouth, she sang and the tears welled up in my eyes.  If ever there were an enchanting young woman standing on the brink of discovery — this was it!  And now, the discovery is about to be all of ours!”

According to director Jack O’Brien, “THE SOUND OF MUSIC has been in our ears for decades, as it deserves to be. But it might be time to look once more, and more closely, at this remarkable work which, I feel, begins to reveal itself as deeper, richer, and more powerful than ever. It’s no longer ‘your mother’s’ familiar SOUND OF MUSIC. We are tearing off the varnish of the past from one of the great glories of our theatergoing experience and making it fresh! This is an opportunity we’ve all longed to create!”

Producer Beth Williams (Grove Entertainment) said, “It’s a great privilege to bring this beloved Rodgers & Hammerstein musical to theaters across North America. We hope that people of all ages will continue to fall in love with it for the first time, or all over again, and that it will truly become one of their ‘favorite things.’ From our distinguished team led by the creative master Jack O’Brien, audiences can expect a truly magnificent production of THE SOUND OF MUSIC.”

In the words of Ted Chapin, President of Rodgers & Hammerstein, “THE SOUND OF MUSIC continues to be the world’s most beloved musical.  When a major national tour was suggested, I not only agreed, but was willing to roll up my sleeves and do whatever I could to fashion a new stage production that would re-engage today’s theatergoing public. The show was originally created for Broadway, and seeing it on stage only reinforces the power of the story and the score. And with Jack O’Brien at the directorial helm – well, we simply couldn’t do better. Landing somewhere between The Coast of Utopia and Hairspray (shows for which Jack won the Tony®), his production will be smart, focused, and surprising.  I can’t wait.”

THE SOUND OF MUSIC enjoyed extraordinary success as the first live television production of a musical in over 50 years when “The Sound of Music Live!” aired on NBC in December, 2013; 2015 marks the 50th anniversary of the film version, which continues to be the most successful movie musical in history. The spirited, romantic and beloved musical story of Maria and the Von Trapp Family will once again thrill audiences with such songs as “My Favorite Things,” “Do-Re-Mi,” “Climb Ev’ry Mountain,” “Edelweiss” and the title song.

TEXAS PERFORMING ARTS is situated on the main campus of one of the largest and most prestigious research universities in the country.  Texas Performing Arts serves The University of Texas at Austin campus and the Austin community at large through a diverse season of world-class fine arts performances, educational activities, and collaborative partnerships.  Texas Performing Arts presents an international season of music, theatre, dance, and conversation in our multiple venues, as well as the best in touring Broadway productions and concert attractions. As a university-based arts center it is also committed to serving the academic mission of the College of Fine Arts by supporting the work of our students, faculty and staff on our stages, classrooms, studios and production shops; and in the educational outreach programs it provides for the Austin community.