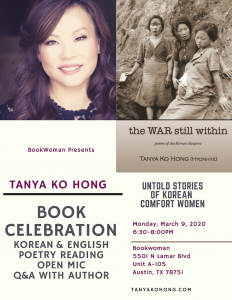 Come out for a Monday of poetry and community with visiting Korean American poet Tanya Ko Hong!

An utterly stunning dive into the center of the history and humanity of Korean “comfort women” and how the ripples continue into the Korean diaspora. Tanya Ko Hong is a masterful writer and storyteller.

Please join us on Monday, March 9, 2020, to celebrate Tanya Ko Hong’s book talk, The War Still Within: Poems of the Korean Diaspora. Dedicated to “all the women everywhere who have lost their names,” this book celebrates the courage of women to speak their truth and acknowledges the

An utterly stunning dive into the center of the history and humanity of Korean “comfort women” and how the ripples continue into the Korean diaspora. Tanya Ko Hong is a masterful writer and storyteller.

Please join us on Monday, March 9, 2020, to celebrate Tanya Ko Hong’s book talk, The War Still Within: Poems of the Korean Diaspora. Dedicated to “all the women everywhere who have lost their names,” this book celebrates the courage of women to speak their truth and acknowledges the suffering of those who never could.

Part historical imagining of Japan’s so-called “comfort women” during WWII, part personal claiming of her own experiences with immigration and motherhood, and part exploration of identity across two languages, The War Still Within weaves together two cultures and gives voice to generations of Korean and Korean-American women. Ellen Bass remarks that these “spare, elegant poems” will “break our hearts with the truth and astonish us with compassion.”

Come out for a Monday of poetry and community to celebrate this momentous occasion! The author will read some poems from the book in both Korean and English. We’ll have a Q&A with the author, and an open mic.

Tanya Ko Hong (Hyonhye) is an internationally published poet, translator, and cultural-curator. She is the author of five books, most recently, The War Still Within (KYSO Flash Press, 2019).

Tanya’s work has won the Yun Doon-ju Korean-American Literature Award, was a finalist in Frontier’s Chapbook Contest, and has been nominated for a Pushcart Prize. In 2015, her segmented poem, “Comfort Woman,” received an honorable mention from the Women’s National Book Association. Her poems have been translated into Korean, Japanese, Bosnian and Albanian. In 2015 and 2018, she became the first person to translate and publish Arthur Sze’s poems in Korean.

Tanya is a Ph.D. student in Mythological Studies at Pacifica Graduate Institute, and holds an MFA degree from Antioch University in Los Angeles.

***PRAISE FOR THE WAR STILL WITHIN

“Tanya Ko Hong captures in these spare, elegant poems, a world of cruelty, suffering and survival. Here is beauty juxtaposed with pain so deep it’s almost impossible to put into words. And yet this fine poet does just that. She breaks our hearts with the truth and astonishes us with her compassion.””
— Ellen Bass, Chancellor of the Academy of American Poets

“In The War Still Within, Tanya Ko Hong weaves a scarlet thread from Korea to the United States, from World War II to yesterday, from ancient stories to cell phone calls–this blood-soaked thread is the suffering of women and the legacy handed down from mother to daughter, for generations and across continents. These poems invoke exquisite imagery to tell the truth about exploitation, cruelty, betrayal, and displacement. The stories of these women burn themselves into your heart.”

“Dedicated in part to her long-dead mother and to women who have lost their names, Tanya Ko Hong’s The War Still Within wages its battles in one exquisitely revealing poem after another. The author gives names to the nameless: the Korean comfort women during WWII, as well as women who came after, women who suffered too long in silence, whose sad fate shackled them to lives of quiet desperation. This extraordinary book is for them, and for all of us.”
— Alexis Rhone Fancher, poetry editor of Cultural Weekly and author of five books of poetry

“In The War Still Within, Tanya Ko Hong illuminates dark corners of forbidden territories. She exposes her own history and struggles as a Korean-American woman, and in a searingly frank sequence she writes in the voices of those who were Korean “comfort women” during WWII. She delicately balances a stance that is explicit as well as gorgeously reflective. She vivifies and deepens experience in this dynamic collection. We should follow her lead, follow her call as a way into the future: “Tonight my tongue cuts galaxy.”
— Molly Bendall, author of five books of poetry and professor of English at USC Dornsife

Please join us for a bilingual open mic. You are invited to bring a poem to share. Both Korean and English writers are welcome.