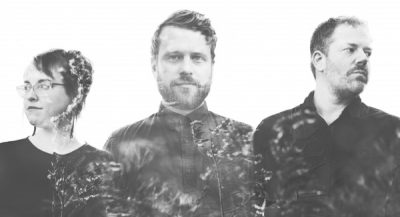 ASHEVILLE — Jon Stickley Trio is making waves with the independent and fan-funded release of their 2nd album, Lost at Last, on October 6, 2015. The originality and sheer

ASHEVILLE — Jon Stickley Trio is making waves with the independent and fan-funded release of their 2nd album, Lost at Last, on October 6, 2015. The originality and sheer energy of this genre-bending ensemble serves as a welcome wake up call for those who experience it. With roots in gypsy jazz, bluegrass, and hip-hop in an “exhilarating all-acoustic swirl” (Acoustic Guitar Magazine), Jon Stickley Trio combines Jon Stickley’s rapid-fire flatpicking guitar with the sultry and wild, yet refined, melodies of Lyndsay Pruett on violin set over the deep groove of Patrick Armitage on drums. The three have fused their collective styles into a repertoire of exciting and innovative original music along with some captivating covers. Lost at Last was recorded in the band’s hometown of Asheville, NC at the iconic Echo Mountain Studios under the watchful eye of producer Dave King (The Bad Plus).

The New York Times’ Nate Chinen writes “… there’s hardy cohesion among the players — no less on the Gypsy standard ‘Valse de Wasso’ than on ‘Darth Radar’ a turbocharged original with a ska upbeat and a shredding melody. And when Mr. Stickley and friends turn to bluegrass, as on ‘The High Road,’ by Tim O’Brien, they sound both respectful and free.” Premier Guitar Magazine also took note of “Darth Radar,” with Jason Shadrick calling it, “a rapid-fire take that moves from a serious ska beat to burning surf-style runs that would make Dick Dale proud.” Jon hosted a lesson at Premier Guitar’s website on one of his favorite techniques which uses the guitar’s natural harmonics to create a melody.

Lost at Last garnered the attention of NPR’s World Cafe to invite them to be part of their “Sense of Place” series in which XPN Radio (out of Philadelphia) brought their crew, including longtime host David Dye, to The Grey Eagle in Asheville in February 2016 for a sold out evening of entertainment including Jon Stickley Trio. Folks can listen in to the World Cafe segment at http://bit.ly/JonStickleyTrio_WorldCafe_2016 .

NPR Music featured “Point to Point” off Lost at Last on their program Heavy Rotation with Folk Alley’s Linda Fahey writing, “Jon Stickley has been playing in bluegrass bands for years, and is known as a progressive and adventurous flatpicker, but his musical roots and influences range widely to include rap, grunge, punk and more… [It’s] a wonderfully unique sound that defies easy categorization.”

Over the course of this album the trio has produced two “official” music videos. “Point to Point” recently was awarded three prizes at the 2016 Music Video Asheville including Judges Choice, People’s Choice and Best Soundtrack. Folk Alley premiered the video for “Rice Dream,” writing “Jon Stickley’s guitar harmonics and Lyndsay Pruett’s violin harmonics twine seamlessly together, creating an almost otherworldly atmosphere and the end result is a bit unnerving in its intensity.”

Asheville-area NPR affiliate, WNCW, consistently sings praise of Jon Stickley Trio. The band placed #13 in WNCW’s Top 100 of 2015. Music Director and Morning Host Martin Anderson says, “Asheville has a force to be reckoned with in the tight three-piece perfection of the Jon Stickley Trio. It’s pretty incredible how closely the three play with their unique blend of Appalachian, jazz, maybe even prog-rock styles.” The Trio also placed in a couple of the WNCW Staff Top Ten Picks of 2015.

In December 2015, Jon Stickley Trio made an appearance on Nashville’s Music City Roots. “I made a point to get a long interview in with the Jon Stickley Trio before the show, because their debut album Lost At Last has had a big impact on me and my music geek friends. There’s a ton of thought and skill here, but the music also glides and grooves in ways that anyone can relate to,” says the show co-host and journalist Craig Havighurst. He goes on, “Stickley is a super-resourceful acoustic guitarist who uses the instrument in many surprising ways and whose timing is just flawless. Fiddler Lyndsay Pruett puts deep thought into her flowing solos, plus she adds little flourishes and sudden stops that elevate the music. Drummer Patrick Armitage studied for six years with Dave King, the astonishing drummer with The Bad Plus, and it shows in his phrasing and decisiveness.”

During their Music City Roots performance the Trio played three songs and received three standing ovations from packed audience. They also played a new song that will be on their forthcoming record coming out in the Fall of 2016 entitled “Echo Location.” You can watch it here ?  http://bit.ly/Js3_MCR_Dec2015_EchoLocation.

Prior to that performance and bringing at all full circle, Jon Stickley Trio returned to the setting of where Lost at Last was recorded, Echo Mountain Recording Studios, and performed for almost two hours for a live webcast on IAMAVL.com’s “Echo Sessions.” Watch the full show here ?  http://bit.ly/Js3_Nov2015_IAMAVLEchoSessions_FullShow.

For forthcoming new about his next release, updates from the road, and tour dates, please visit www.facebook.com/JonStickleyTrio and www.twitter.com/StickleyMusic.