In Danger (or, you should really, really give a shit) // Opening Reception 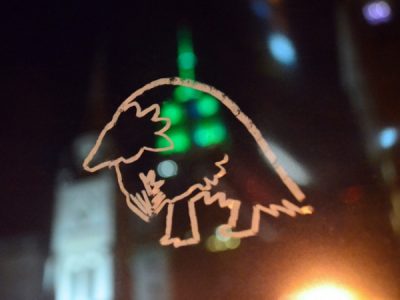 Art.Science.Gallery. is proud to announce the opening of In Danger (or, you should really, really give a shit), an exhibition that seeks to highlight the alarming rate of species decline and extinction worldwide, caused directly and indirectly by human impacts, and what we can do about it. Today’s extinction rate is estimated to be between 1,000 and 10,000 times higher than the natural extinction rate, with an estimated 150-200 species going extinct every 24 hours! This is the highest rate of

Art.Science.Gallery. is proud to announce the opening of In Danger (or, you should really, really give a shit), an exhibition that seeks to highlight the alarming rate of species decline and extinction worldwide, caused directly and indirectly by human impacts, and what we can do about it. Today’s extinction rate is estimated to be between 1,000 and 10,000 times higher than the natural extinction rate, with an estimated 150-200 species going extinct every 24 hours! This is the highest rate of biodiversity loss since the dinosaurs went extinct 65 million years ago, and is now being called the 6th Mass Extinction or the Anthropocene Extinction. The artworks in this exhibition tell the story of and conservation science about plants, animals and fungi on the IUCN Red List of Threatened Species, in the Critically Endangered (CE) category. This exhibit has three main goals:

(1) Visualize the immediacy and magnitude of CE species issues
(2) Remember extinct species through an altar of remembrance
(3) Motivate visitors to take action through education, personal behavior, and advocacy.

In remembrance of extinct species, the exhibit will include an altar of remembrance / altar de muertos / ofrenda for species on the IUCN Red List Extinct in the Wild (EW) and Extinct (E) categories. Visitors and contributing artists will be invited to leave remembrances including photographs, important resources used by extinct species, or notable scientists or advocates that have spent their lives protecting or studying these animals.

Finally, we wish to empower visitors to help stop species extinctions through direct action, education and advocacy. To this end, the exhibit will include a participatory element in a postcard-writing station where visitors can create hand-written postcards with solutions and messages to political leaders that will be displayed during the exhibition and mailed en-masse to global leaders after the exhibit. Visitors will also be able to take away educational resources from our conservation partners outlining solutions and actions that anyone can take to help reduce biodiversity loss.

Special events during the exhibition include a short course entitled Conservation Biology, documentary film screenings, and talks by artists and scientists. The exhibition will also be the gallery’s featured exhibition for the 14th Annual EAST Austin Studio Tour, a self-guided tour of East Austin’s studios and creative spaces November 14-15 & 21-22, 2015.

5% from the sale of each artwork in the exhibition will benefit the IUCN Red List of Threatened Species, to support their efforts to assess the conservation status of species, subspecies, varieties, and even selected subpopulations on a global scale for the past 50 years in order to highlight taxa threatened with extinction, and therefore promote their conservation.

This show is organized and curated by Jed Dore, MFA and Hayley Gillespie, PhD.  Hayley is founder/director of Art.Science.Gallery. (Austin, TX) and loves finding ways to engage the public in the sciences through the visual arts. Jed is an award-winning illustrator and founder/owner of Ink & Sword art and design studio (New York, NY). Both are inspired by the natural world and want to inspire the public to take action through education.

The Dumpster Project is many things: a re-imagining of home, a portable learning initiative, a sustainability conversation, a creative branch of a wider green campus initiatives at Huston-Tillotson University (HT), a historically black institution located in the heart of East Austin, and, most importantly, an innovative STEM education platform that uses the real-world challenge of transforming a trash dumpster into a tiny sustainable home to inspire learners of all ages.

The Center for Biological Diversity’s Endangered Species Condoms project was launched in 2009, and since then has distributed hundreds of thousands of free condoms across the United States. Wrapped in colorful, wildlife-themed packages (with artwork by Shawn DiCriscio), Endangered Species Condoms offer a fun, unique way to get people talking about the link between human population growth and the species extinction crisis.

The E.O. Wilson Biodiversity Foundation’s mission is to expand knowledge and understanding of biodiversity in all its detail and complexity in order to best care for the living world. We work to promote the protection of biodiversity as a moral imperative and advocate that universal conservation should be one of humanity’s transcendent goals. We are dedicated, through exhibits such as this, to cultivating awareness and promoting understanding as a key foundation for citizen engagement and inspired care of our planet.

Natalie Bradford currently lives in Austin, pursuing a BFA in Studio Art at the University of Texas. Natalie utilizes printmaking and painting to examine parallels between feminine, human bodies and non-human animal bodies in relation to modes of production and consumption.

Linda Byrne is a visual artist and sculptor, exhibiting widely across the United States. Some shows include “Brimming On The Edge” in New York, and the well-received exhibition, “Nurturing Nature, Artists Engage the Environment” at galleries in New York and Pennsylvania. She has collaborated with poet and sound artist Maggie Dubris on two multimedia installations about our disappearing natural world. Over the years, Linda has received many artist residencies, awards and reviews.

Morgan Grasham is an internationally exhibited and collected artist making science-based art in rural Texas. She is known for surreal paintings of figures distorted with software, which visualizes concepts in astrophysics about the nature of time and black holes. Grasham is a mixed media artist working in oil on canvas, taxidermy, software, bronze, and more. She lives at the Chicken Farm Art Center in San Angelo with her ceramicist husband Eric Grasham.

David Martinez has a deep love for science and studied anthropology at the University of Texas. A folk artist based in scientific concepts, David is equally inspired by both physicists and legends, and his artwork seeks to create and illustrate a new mythology by drawing themes from modern and ancient sources. Currently, David is creating a series on Mother Nature, incorporating his own new mythologies alongside old ones in various portrayals of a personified Mother Nature.

Tammy West is influenced by the natural world, science and stories of culture and people sifted through her own musings and experiences growing up, traveling, planting trees, and helping the land. Her work takes many forms, including photography, painting, encaustic, earthworks and sculpture. She is currently inspired by the idea of “what is important” and “protection” and has several series of works addressing these concepts. Her professional and person life sits at the intersection between art, science and natural history.