Presented by FILMCollective at Online/Virtual Space 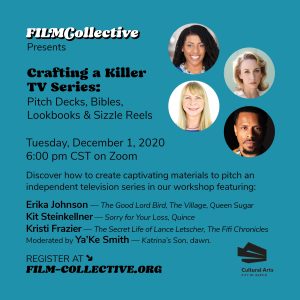 Discover how to create captivating materials to pitch an independent television series in our Zoom workshop.

Join FILMCollective for a Workshop Featuring

As We Discuss Crafting a Killer TV Series with Our Moderator

Join FILMCollective for a Workshop Featuring

As We Discuss Crafting a Killer TV Series with Our Moderator

NOTE: THE ZOOM LINK WILL BE SENT VIA EMAIL TO REGISTERED GUESTS

After earning her BA in Film and Television at UCLA, Erika held down several industry jobs, however, the opportunity that lead her into TV writing was landing an Assistant job on the groundbreaking ABC series, LOST. From there, Erika was accepted into the Disney|ABC Writing Program, and staffed on UGLY BETTY, where she remained for two seasons. She then spent three seasons on the hit BET drama, BEING MARY JANE.

Erika is the co-founder of Black Women Who Brunch (BWB) – a network of Black women TV writers. BWB was featured in The Hollywood Reporter’s 2018 Women In Entertainment issue, which was their biggest photoshoot ever. Erika is a Southern California native who resides in Los Angeles.

Kit Steinkellner is best known as creator/executive producer of the critically-acclaimed Facebook original series SORRY FOR YOUR LOSS starring Elizabeth Olsen. She is currently adapting her debut graphic novel QUINCE, winner of the Independent Publishers Book Awards Gold Medal for Best Graphic Novel, into a feature for Netflix. Steinkellner is also currently writing features for Lionsgate and Sony, and a pilot for FX.

Kristi Frazier is an award-winning documentary producer with multiple films and national advertisements to her credit. Recently, she directed the feature film Take Pains. Be Perfect., marking a third-time collaboration with Academy Award-nominated editor Sandra Adair. Kristi is a creator and writer, developing a half-hour action-comedy spy-fi series, The FiFi Chronicles, as well as many other projects. She thrives on collaboration and has enjoyed mentoring numerous up-and-coming filmmakers.

Ya’Ke Smith, known for his unflinching and veracious style of storytelling, is a rising voice in independent cinema.

He has been featured on NPR, CNN, HLN, Ebony Online, Indiewire, Filmmaker Magazine and Shadow&Act.

Ya’Ke graduated with his B.A. from the Communication Arts Department at the University of The Incarnate Word, where he later became the youngest recipient of the Alumni of Distinction for Professional Achievement award. He received his M.F.A. from the University of Texas at Austin’s film program, where he is currently an Associate Professor of film and the Associate Dean of Diversity, Equity and Inclusion in the Moody College of Communication. Variety magazine named him one of the best film educators “from across the globe.”

This project is supported in part by the Cultural Arts Division of the City of Austin Economic Development Department. FILMCollective is a project of Moving Image Arts & Education, a 501(c)3 nonprofit organization.