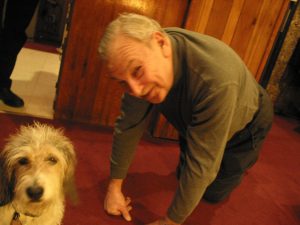 Kenzie Slottow will be leading this workshop in “Conduction” and the public is invited to come and check out this system of organized improvisation.

Conduction®: The practice of conveying and interpreting a lexicon of directives to construct or modify sonic arrangement or composition; a structure-content exchange between composer/conductor and instrumentalists that provides the immediate possibility of initiating or altering harmony, melody, rhythm, tempo, progression, articulation, phrasing or form through the manipulation of pitch, dynamics (volume/intensity/density), timbre, duration, silence, and organization in real-time.

Conduction®: The practice of conveying and interpreting a lexicon of directives to construct or modify sonic arrangement or composition; a structure-content exchange between composer/conductor and instrumentalists that provides the immediate possibility of initiating or altering harmony, melody, rhythm, tempo, progression, articulation, phrasing or form through the manipulation of pitch, dynamics (volume/intensity/density), timbre, duration, silence, and organization in real-time.

The public is invited to check out this form of music.  If you are interested in participating come to the workshop and check it out first.  We will be doing this every month.

The Cloud Tree art gallery will be open while we’re having our Conduction session, that is learning some gestures to follow and steeping ourselves in the concepts. We’ll set up some seats for anybody who wants to come and check out what we’re doing without actually participating in the music making (a very casual “audience”).

It will still be very chill, as we’re learning and workshopping the techniques together – NO need to have attended the previous conduction jams to come to this one! We’ll break in the middle and have some food, like last time, and then do a bunch more music making.

ABOUT CONDUCTION
We’ll be experimenting using the lexicon of gestures created by Butch Morris. Conduction gestures have similarities to classical conducting ones, but the “pieces” are “composed” in real time by the performing individuals and group as they listen to each other and develop, enhance and elevate the sounds that are happening around them in the moment. The leader’s job is to tease out a form that makes sense with the content that the performers produce, which is influenced by the combination of styles and musical sensibilities in the ensemble.

PHILOSOPHY
One of the goals of Conduction is to allow musicians from any background to play together more fluidly and fluently, with more compelling interaction than ever before. The most exciting phenomenon can grow out of this exchange – a feeling of being deeply connected to your fellow humans, since you’re focusing on others so much and trusting and co-creating really intentionally as a group. I am hatching plans for running more formal events using Conduction that focus on the metaphor of empathy and listening for society and human interaction at large. It’s something the world could use a lot more of right now!

CONNECT WITH The Liminal Sound Series